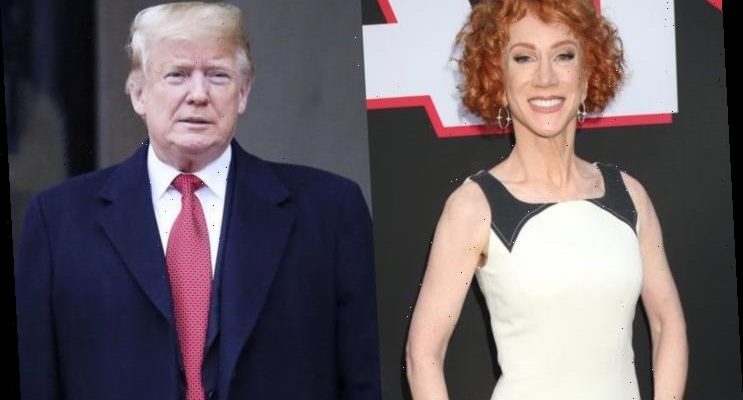 The video in question shows President Donald Trump, whose face is superimposed on the body of Colin Firth’s character in ‘Kingsman: The Secret Service’ scenes, killing his enemies, including Griffin and late senator John McCain.

AceShowbiz -Twitter went berserk after a fake violent video depicting President Donald Trump as a murderer went viral. According to the New York Times, the video was shown last week at a three-day conference of the president’s supporters at the Trump National Doral Miami.

After the video made headlines, a spokesman for Trump’s campaign, Tim Murtaugh, told the Times he knew nothing about the video, saying it “was not produced by the campaign, and we do not condone violence.”

Right-wing political activist Stephen Miller tried to play down the violence depicted in the video, comparing it to the “Joker” movie and argued that it was covered by “free speech.” He tweeted, “Thinking this video somehow will incite violence against media brands is no different than thinking Joker will lead to mass shootings or heavy metal music leads to satanic suicides or video games create mass shooters. It’s a meme, and it’s free speech.”

But others disagreed with him and think that it should not be taken lightly. Griffin, who was once heavily criticized for a photo of her with a fake decapitated head of Trump, wrote on Twitter, “I’m depicted as being murdered by The President of the United States in this video. The left, right & center left me hanging out to dry regarding the Trump mask photo. Please don’t let it happen again. No, this video isn’t a joke to his followers. And it will not be taken as such.”

Meghan McCain also reacted to Miller’s response to the video. “No it isn’t – the joker is a fictional character from a comic book,” said the daughter of late senator McCain. “One of the people in this video is my Dad, sitting senators and congresspeople. Please don’t insult me or them by insinuating this is anything like heavy metal. This could inspire violence towards REAL people.”

She added, “Also you’d be screaming bloody murder if something like this was shown at an Adam Schiff or Obama event. So please for God’s sake just stop. This video is disgusting and disturbing and any human with any moral clarity sees that.”

Another Twitter user replied to Miller, “How about admitting that it’s incredibly inappropriate and un-presidential? Be the adult in the room for once.”

Cindy McCain, John McCain’s widow and Meghan’s mother, also expressed her disgust as writing, “Reports describing a violent video played at a Trump Campaign event in which images of reporters & @JohnMcCain are being slain by Pres Trump violate every norm our society expects from its leaders& the institutions that bare their names. I stand w/ @whca in registering my outrage.”

The White House Correspondents Association condemned the video and called on Trump to denounce it. “All Americans should condemn this depiction of violence directed towards journalists,” the group said in a statement. “We have previously told the president his rhetoric could incite violence. Now we call on him and everybody associated with this conference to denounce this video and affirm that violence has no place in our society.”

CNN said, “Sadly, this is not the first time that supporters of the president have promoted violence against the media in a video they apparently find entertaining – but it is by far and away the worst. The images depicted are vile and horrific. The president and his family, the White House and the Trump campaign need to denounce it immediately in the strongest possible terms. Anything less equates to a tacit endorsement of violence and should not be tolerated by anyone.”

Trump has not directly addressed the video. White House spokeswoman Stephanie Grisham said on Twitter that the president has not yet seen the fake video in which he’s depicted as a gunman, “but based on everything he has heard, he strongly condemns the video.”