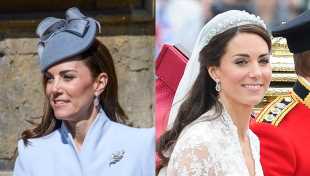 Kate Middleton just paid the sweetest homage to her husband Prince William ahead of their eight wedding anniversary, even though he’s been the subject of cheating rumors.

Kate Middleton showed she’s still madly in love with husband Prince William nearly eight years after she walked down the aisle at London’s Westminster Abbey. On her wedding day she wore a pair of bespoke Robinson Pelham diamond earrings with acorn leaf-shaped drops in the middle. The Duchess of Cambridge pulled them out for only the second time since then when she attended Easter Sunday services with her husband at Windsor’s St. George Chapel on April 21, eight days ahead of their April 29 wedding anniversary. What a special way for the 37-year-old mom of three to remember that very special day when she wed her college sweetheart William in front of a worldwide viewing audience.

The earrings were a gift from Kate’s parents for her to wear at her wedding. They were custom made after Queen Elizabeth II granted Kate and her family a coat of arms ahead of the service and the acorn was a focal point on it. There were three, symbolizing the three Middleton children, the fact that oak trees are abundant in the area where she grew up and that oak is a long-established symbol of both “England” and “Strength.” The only other time the Duchess has worn them outside of her wedding day was at a 2016 at the Order of the Garter service, so for her to don them once again so close to her anniversary is such a sweet nod to her marriage.

The couple was all smiles at the Easter Sunday service, looking as blissfully in love as their wedding day. The next morning, they released photos of their youngest son Prince Louis ahead of his first birthday on April 23. Prince William has recently been the center of internet rumors that he cheated on Kate while she was pregnant with the youngster with aristocratic neighbor, the Marchioness of Cholmondeley, Rose Hanbury, who lives nearby the family home Anmer Hall in Norfolk.

It’s not clear where the rumor originated from, and there has been no physical proof in the form of photos, videos, or witnesses going on the record. William’s attorneys with London law firm Harbottle and Lewis shot down the cheating allegations when In Touch Weekly published a cover story about it, saying there is no truth to it and have threatened legal action against British outlets that run with the story.

“In addition to being false and highly damaging, the publication of false speculation in respect of our client’s private life also constitutes a breach of his privacy pursuant to Article 8 of the European Convention to Human Rights,” attorneys with London law firm, which has represented the royal family before, said in a letter that was sent to at least one British publication after the release of In Touch Weekly‘s cover story, according to the Daily Beast.