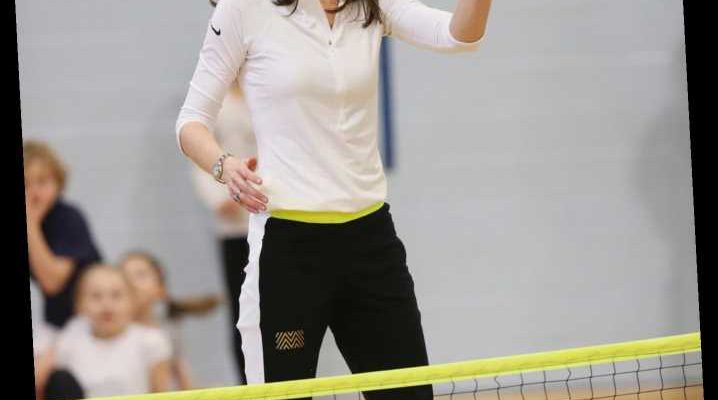 While Kate Middleton works on her ace serve, her three kids are working on their tennis skills as well!

The royal mom and Prince William have been seen taking tennis lessons at the exclusive Hurlingham club in Fulham, south London — and sometimes, the whole family comes along.

The kids — Prince George, 6, Princess Charlotte, 4, and Prince Louis, 1 — have been on the playground outside, having fun while their parents hit balls.

Even when Kate was pregnant with Louis, she still found time for some lessons.

“It wasn’t hard-going tennis — they weren’t rushing around. They are obviously choosing to improve their tennis,” a source at the club told PEOPLE. “She hits the ball with nice top spin. She is a good minor athlete.”

Kate and William, both 37, have also been seen having lunch at the club with their two older children — without their nanny. The source said George and Charlotte “looked perky and alert. It was a normal family of four. They were enjoying the sport and some lovely, natural family time.”

Both Kate and Prince William are avid tennis fans who have attended Wimbledon over the years. They even have a court at their country home in Norfolk, Anmer Hall!

Kate has shown off her tennis skills on several occasions — even while wearing heels! During a 2018 visit to Coach Core, a program that trains young people to become coaches and encourages the next generation of athletes, Kate left her sneakers at home and hit a few balls in black booties with little heels.

Can’t get enough of PEOPLE‘s Royals coverage? Sign up for our free Royals newsletter to get the latest updates on Kate Middleton, Meghan Markle and more!

Prince George is also getting into the sport! On Wimbledon Morning Coffee, a show released on the famed tennis tournament’s Twitter page to recap the previous day’s events, the hosts chatted about Kate Middleton‘s outing to watch a few matches this past summer. The royal mom of three sat with British tennis player Katie Boulter and retired British star athlete Anne Keothavong, who told the host that talk turned to George’s interest in the sport.

Kate reportedly shared that Prince George’s favorite player is Roger Federer — and the little royal has even played tennis with the sports star!