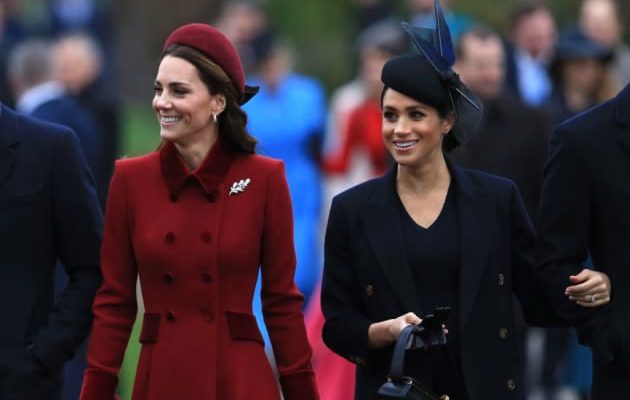 Obviously, it’s glorious news, and the whole world is sharing in the happiness of the Duchess of Sussex and her husband, Prince Harry, who’s overjoyed at becoming a father.

Of course, it wouldn’t be a major development involving the royal family if it didn’t prompt tabloid media outlets all over the world to issue hot takes and attempt to stir up drama.

Having apparently grown weary of the “Meghan and Harry are moving to Africa the second their baby is born!” narrative, several sites have changed tack and are now pushing a different brand of nonsense.

Now the obvious BS you’re being asked to accept is the story that Kate is jealous of Meghan and wants to have another baby in order to reclaim the spotlight.

“Catherine would like another baby,” one source tells Radar Online.

“She loves children and is prepared to put herself through another pregnancy even though they have been complicated by severe morning sickness in the past.”

“Complicated” is putting it mildly, of course.

During her first three pregnancies, Kate suffered from Hyperemesis Gravidarum, an agonizing condition that results in incessant stomach pain and vomiting.

According to WebMD, the inability to keep food and water down often results in “dehydration, vitamin  and mineral deficit, and the loss of greater than five percent of their original body weight.”

Several UK tabloids pushed the narrative that Kate became “dangerously thin” as a result of her condition.

Now, some of those same outlets would like you to believe she’s willing to go through all that again at the age of 37 simply because she feels she’s not getting enough attention.

To be clear — we’re not saying Kate will definitively not have a fourth child.

But we are saying that if she does, it won’t be because she’s jealous of Meghan’s time in center stage.

Considering all the unwanted media attention Kate has received in the wake of rumors that Prince William is having an affair with Rose Hanbury, we’re sure she’s more than happy to let someone else have the spotlight for a bit.

And we think it’s safe to assume that, like the rest of the world, she’s been eager to congratulate the Duchess of Sussex on becoming a mom.

Meghan Markle: Is She FAKING Her Pregnancy?!?