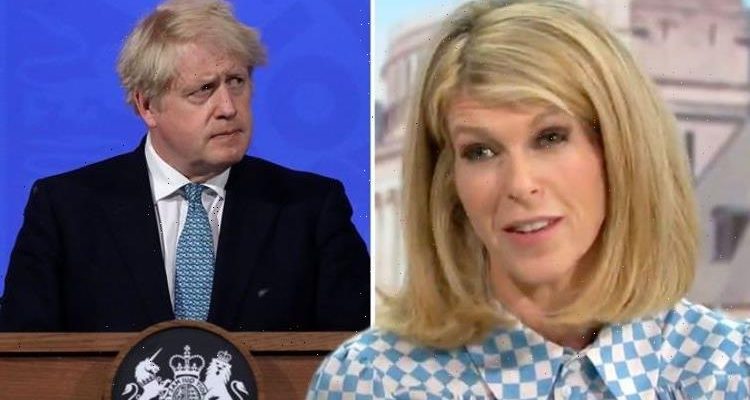 Kate Garraway says there are 'challenges ahead' for Derek

Good Morning Britain presenter Kate Garraway shared her worries about the easing of lockdown restrictions in a chat with Charlotte Hawkins and guests Afua Adom and Isabel Oakeshott today. The host admitted she feared there could be a “slippery slope” as coronavirus cases continue to rise across Britain.

Prime Minister Boris Johnson has confirmed the majority of restrictions will be eased on July 19.

He has called for the public to use their own judgement when it comes to wearing a mask and social distancing, but “expects and recommends” face coverings to be worn in enclosed places.

Speaking on the show today, 54-year-old Kate said not making masks compulsory could be a “slippery slope”.

Guest Isabel agreed, but said she believes masks are “symbolic in the wrong way”.

“We do not need to keep perpetuating this state of fear and anxiety, just look at the state we’re in as of today.

“The NHS app are pinging so many people that businesses can’t function,” she continued, adding: “People are “needlessly self-isolating.

Kate’s concerns come after she gave an update about her husband Derek’s health.

The 53-year-old battled Covid-19, which caused other health complications for over a year.

He is now home and under the care of professionals, however Kate said he is far from being fully recovered.

She explained on Good Morning Britain: “He’s very up and down, we’re certainly not a long way out of the woods.”

On why her spouse returned home earlier this year, she added: “Not because he was better, no.

“But being home has meant we’ve seen some things improve.

“Definitely having the family around, having the children around has provided stimulation and I think the problem is you latch on to the positives, which is good because you have to, but there’s absolutely no doubt that there’s huge challenges ahead.”

The mother-of-two added “things have improved but not much”.

In April, the presenter revealed how her children reacted to their dad returning home after more than a year in hospital.

She said: “As we pulled up, I could see two little faces of Darcey and Billy looking out the window and I could see Billy literally say ‘he’s here!’ and they sort of ran out and ran forward.

“He immediately burst into tears, there was a lot of hugging and got him inside. He absolutely knew he was home.”