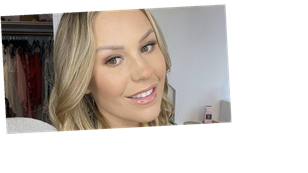 Kate Ferdinand has delighted fans with another photo of herself with baby son Cree.

And now, as she continues to recover from giving birth to her baby son, she has shown off the tot in a new snap.

In the photo, which Kate shared on her Instagram page, Kate is wearing a pair of black leggings with a black top and a chic beige shirt, which she has left open, over the top.

New mum Kate matched the shirt with a pair of beige slip on Balenciaga trainers.

She looked stunning with a small amount go makeup on including a touch of eyeshadow, blusher and mascara.

Kate’s blonde locks were styled in a down, curly hairstyle with a middle parting.

As she held up her phone to take the picture in the mirror, which she took inside her incredible walk-in wardrobe, she was seen holding her adorable baby boy, who is snuggling into her shoulder.

New mum Kate, who recently did her hair and makeup for the first time in six weeks, shared the adorable mother-son photo with her 1.4million followers on her Instagram.

As she shared the snap, she wrote alongside it: “Baby boy” followed by three heart emojis.

The stunning photo received more than 119,000 likes from fans, while some fans gushed over the sweet snap in the comments.

One wrote: “Beautiful picture” followed by a read heart emoji.

While a second said: “Wow you look amazing x” and a third added: “Beautiful mummy”.

It comes after Kate ruled out having more children as she recalled her traumatic birth with son Cree.

Kate is a step mum to Rio's three children Lorenz, Tia and Tate, from his late wife Rebecca Ellison.

When asked about the prospect of expanding her brood, she said: “If you ask me right now I would say never ever again. Our house is very hectic as it is.

“We have four kids and two dogs, it's a madhouse. The thought of having another one makes me slightly anxious.”

The blonde beauty went on to admit that while she may not be ready for another baby now, she's open to the idea at a later stage. She added: “I’m only 29 but I feel 39 at the moment! But you never know, I might feel different in a few years.”

The TV personality continued by explaining to MailOnline that she wanted to show the realities of becoming a new mum rather than always posting glamorous snaps of herself.

“I felt like I was scrolling on Instagram and everybody was looking so amazing after having a baby,” she said. “They were in these tight little trousers and I was looking at myself thinking, ‘I don't look like this.’

“I felt like I would just be lying if I didn't tell the truth. I didn't just want to upload a picture of myself looking great, because it's just not real.

“I’ve felt some sort of release from doing it. I was a bit nervous before and sometimes social media can be a real negative but it's been positive for me since I posted my experiences.”