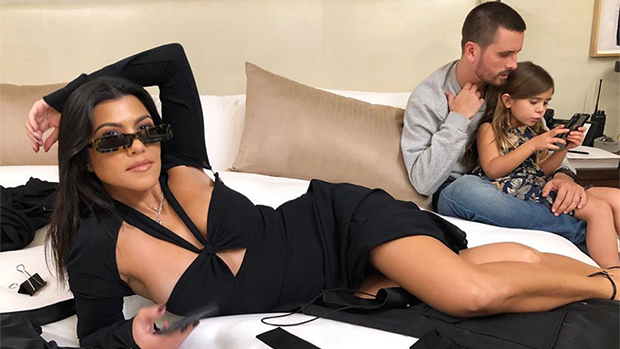 It’s all good in the hood between the KarJenner family & their exes. Just look at all the times that the famous fam posted selfies with their ex-beaus!

The members of the Kardashian-Jenner family have a long list of past flames, but just because the romance is over, doesn’t mean they kick their exes to the curb! The family is notorious for keeping their exes around, even if it means just being friends. Kourtney Kardashian, 39, is still super tight with the father of her children, Scott Disick, 35, and Kris Jenner, 63, has even learned to be civil with ex, Caitlyn Jenner, 69. We’re taking a look at the most scandalous selfies that the KarJenners have shared with their exes!

Kourtney and Scott have co-parenting down to a science, and the two exes are even comfortable enough to hang in bed together! Kourt shared an Instagram photo with her ex on Dec. 5, that showed them kicking it not only in the same room, but in the same bed. The former couple proved just how good their co-parenting skills were with the pic, which seemed to be the most casual thing in the world. Kourt is front-and-center in the pic, lounging on the bed and striking a sexy pose, while Scott is in the background, doting on their daughter, Penelope Disick, 6. The mom of three simply captioned the photo, “Coparenting.” Given that Scott is head-over-heels for Sofia Richie these days, it’s safe to say that’s as far as their relationship goes.

Perhaps, Kourtney received her sense of maturity from her mother. Despite a long and drama-filled divorce from her husband, in August of 2015, Kris snapped a selfie with her ex. The pair got together in honor of Kylie Jenner’s 18th birthday party, and Kim Kardashian joined in on the photo fun too! It was the first time we saw Kris and Caitlyn together in a photo, since the famed momager filed for divorce, citing irreconcilable differences in September, 2014.

It’s certainly no easy task to remain on good terms with your ex, but the KarJenner family seen to have it allllll figured out. Takes notes, y’all!