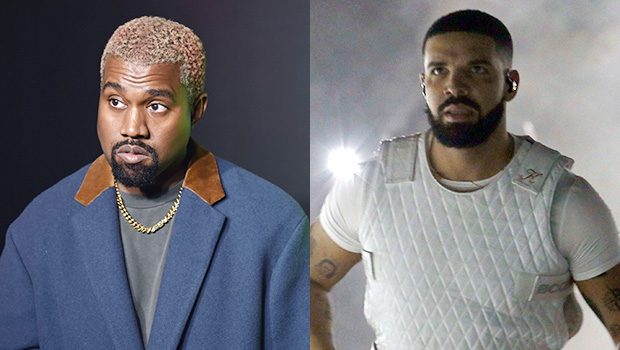 Red alert: Kanye West is tweeting and this time, it’s about Drake! Ye blasted Drizzy for insulting him behind his back, before demanding he ‘stop playing’ and talk to him ‘man to man’!

“This proves shit faker than wrestling,” Kanye West, 41, tweeted on Dec. 13, kicking off another one of what will be a memorable Twitter moment from Mr. Kim Kardashian-West. Kanye shared a screenshot of a message from someone named Free concerning Drake, 32. (“Drake sent in a clearance request for “Say What’s Real”. Do you wanna clear.”) What this means is unclear. Drake remixed the instrumental from Kanye’s “Say You Will” for his 2009 song, “Say What’s Real,” off of Drizzy’s breakthrough mixtape, So Far Gone. It’s unknown why Drake needs to “clear” it with Kanye — he’s probably planning something big for the mixtape’s 10th anniversary. However, it was obvious to anyone following Ye’s Twitter feed that this message set Kanye off!

“Still need that apology for mentioning the 350s and trying to take food out your idols kids mouths,” Kanye tweeted, referencing Drake’s lyric on French Montana’s track, “No Stylist” (“Yeah, keepin’ it G, I told her “don’t wear no 350s ’round me”). “Been trying to meet with you for 6 months bro. You sneak dissing on [Travis Scott] records and texting [Kris Jenner] talking bout how’s the family.”

“I told you I ain’t tell [Pusha T] about your son,” Kanye continued, bringing up Pusha’s massive diss track, “The Story of Adidon,” which doxxed Drake’s secret son. Pusha T, to his credit, has since said that it wasn’t Kanye, but Drake’s longtime collaborator, Noah “40” Shebib, who spilled the tea on Drake’s alleged kid. “It’s all love bro bro but don’t play with me. You stay too close to be playing all these industry games bro.”

“Sending purple emojis when I’m dealing with mental shit. I need my apologies now. Not through Scooter [Braun] either. Not through Travis. I would never intentionally try to hurt you bro. I never even heard none of the diss records. That ain’t my MO. Never did a diss record. No tough talk either. This ain’t about who could pay to have something done to somebody. This man to man bro. This been bothering me too long.”

“Buying first two rows at Pusha show got me hot bro,” Kanye said, accusing Drake of being somehow involved in Pusha-T’s show at the Danforth Music Hall in Toronto, where Pusha was attacked by a stage crasher and had water thrown on him during the performance. It’s impossible for that to happen, per Fader, who says “since the area at the front of the stage in the Music Hall is general admission standing room.” “Stop this already bro,” Kanye continued. “You getting people hurt out here. And over what.”

Just when things couldn’t get any crazier, less than an hour after he started, Kanye had an update: “Drake finally called. Mission accomplished. By the way… not cleared”.

Shortly after Kanye went off on Twitter, Drake apparently caught wind of his tirade and responded in kind with a message on Insta stories:

Cleary, Drizzy is not buying what Kanye is trying to sell in his diatribe. Buckle up kids — it’s about to get FUN!

"I Don’t Just Represent Grime, I Represent the U.K.": An Interview With D Double E