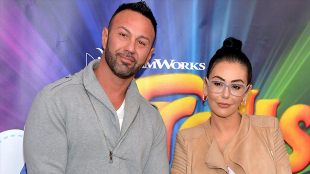 As JWoww and Roger Mathews continue to work through their divorce, they put on a united front to spend Easter as a family with their two children on April 21.

Jenni ‘JWoww’ Farley and Roger Mathews look like they’re getting co-parenting down pat! The exes reunited to spend Easter together with their kids, Meilani, 4, and Greyson, 2, and they even posed for a sweet family photo together. Both stars shared pics and videos from the holiday, with the majority being of the kids alone. However, within their Instagram galleries, they both posted the photo of themselves posing together with the kids. “Beautiful Family Easter Day,” Roger captioned his pics, while JWoww simply wrote, “Happy Easter.” They were joined by several other family members for the occasion.

JWoww filed for divorce from Roger back on Sept. 12, but its wasn’t until a couple of months after that when things really blew up between the pair. In December, she filed for a temporary order of protection from her ex, and he publicly slammed her on Instagram for doing so. At the time, Roger accused Jenni of trying to keep the kids away from him, but she insisted that was never her intention (he was reunited with the children shortly afterward). Things got even crazier at the end of January, though, when JWoww wrote a lengthy statement about her relationship with Roger that featured some shocking accusations.

“You are an abuser to the core, Roger Mathews,” she wrote. “You have spit at me. You have pushed me. You have shoved me. You have aggressively thrown me to the ground. You have prevented me from closing doors to escape having you coming at me. You have belittled and disparaged me. You have threatened me.” She also accused Roger of having an affair and claimed that he had put their two-year-old son, who has developmental disabilities, “in serious medical jeopardy.”

The two are currently in the midst of a custody battle over the children, as they’ve both asked for primary custody of Meilani and Greyson in their divorce papers. It’s unclear where they stand with the legal situation at this time. Meanwhile, earlier this month, JWoww posted a photo to her Instagram story that showed her enjoying a glass of wine with a mystery man, and her rep confirmed to Us Weekly that the Jersey Shore star “has moved on and is happy.”