The 2021 Met Gala turned into an impromptu Justin Bieber concert, and Beibs even bust out his breakthrough hit – ‘Baby’ – for all the A-listers in attendance.

After his triumphant return to the MTV Video Music Awards the night before, it seemed Justin Bieber still felt like singing while at the 2021 Met Gala on Monday (Sept. 13). At the end of the fashion extravaganza, Justin, 27, took the stage at the Metropolitan Museum’s Temple of Dendur, per Vogue, to perform four songs from his discography: “Lonely,” “Hold On,” “Anyone,” and — one song for the OG Beliebers in the audience — “Baby.” For the performance, Justin had changed into an oversized denim jacket and pants combo, and seemingly taking a cue from Kanye West, pulled on a face-obscuring ski mask.

In videos captured by a fan account, Justin dedicated a song to his wife, Hailey Bieber (née Baldwin). Earlier in the night, Hailey, 24, and Justin arrived in elegant black outfits. Hailey wore a plunging, strapless black dress that accentuated her slim figure. She also sported Tiffany & Co. jewelry set in platinum, including a diamond necklace, a Tiffany True® engagement ring, a Tiffany Soleste® emerald-cut halo engagement ring with a diamond band, and a Tiffany Embrace® band ring with diamonds. 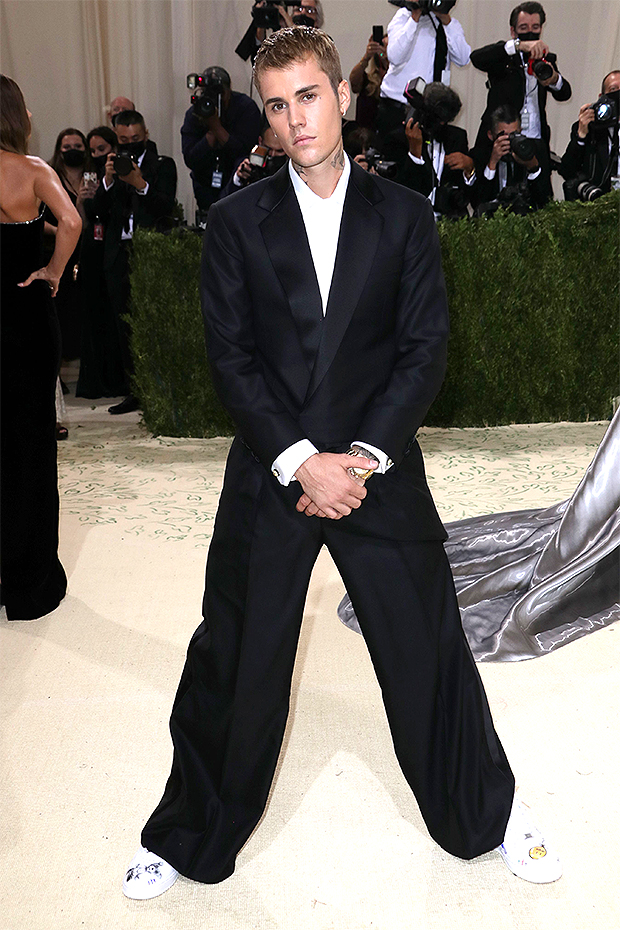 While Hailey’s outfit hugged her figure in all the right places, Justin’s suit did the opposite. The “Ghost” singer wore an oversized suit with a white shirt, one that appeared five sizes too big for him – but was pure fashion. It was one of the many eye-catching outfits that celebrities wore during the Gala, which featured Kim Kardashian in an all-black ensemble, A$AP Rocky and Rihanna in matching comforters, Alexandria Ocasio-Cortez demanding we “Tax The Rich,” and co-chair Billie Eilish living out her full Marilyn Monroe fantasy.

Roughly twenty-four hours before his surprise Met Gala set, Justin returned to the MTV VMAs for the first time since 2015. He and The Kid LAROI descended from the ceiling on wires before delivering a performance of their chart-topping hit, “Stay.” From there, Justin – wearing a hoodie and overalls – sang “Ghost” for his fans. It was an energetic return for Justin, who walked out of the show with the award for Artist of the Year.