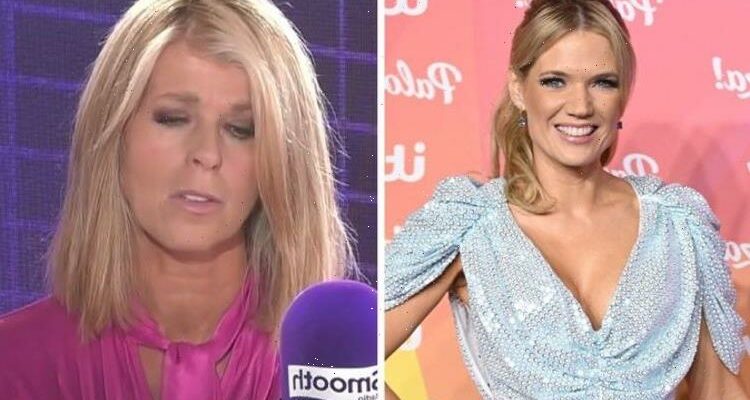 GMB: Kate Garraway laughs as her phone alarm goes off

Kate Garraway has been by Derek’s side every step of the way since the author was struck with the virus back in March 2020, which led him to suffer from a rare brain inflammation that had put him in a coma while his lungs, kidneys, liver and pancreas were also damaged.

In a recent interview with OK! Magazine, Charlotte touched on her admiration for her ITV colleague, who she says has shown such tremendous strength as she juggles her presenting job on Good Morning Britain while caring for her ailing significant other.

It continues to be difficult for her every day

When asked by the publication how her pal has been holding up, the 46-year-old said: “It continues to be difficult for her every day. It was great for her to be able to get Derek back home, but he does require constant care.

“I have such an admiration for the fact that she even comes into present Good Morning Britain. She puts her work hat on and just gets on with it.

“We are there to love and support her in whatever way we can.”

In April, Derek returned to his family home after spending more than a year battling for his life in the hospital. But with the current condition he’s in, reports claim he’ll continue to require round-the-clock care.

Earlier this month, it was revealed that a sequel to Kate’s award-winning ITV documentary Finding Derek had landed a follow-up titled Caring For Derek, as the mother of two navigates through her life while continuing to care for her husband from their home.

The programme will reportedly start from the very first moments Derek leaves the hospital, with cameras expected to continue filming throughout Christmas as fans keep their fingers crossed that the forthcoming TV project will show Derek having made significant progress since returning to his family.

“We follow Kate as she navigates the challenges of the social care system, negotiates the potential traps and unpicks the complexities that seem to be inherent in the system,” ITV revealed in a statement.

“At a time when the debate about social care is at its loudest, this film goes beyond the rhetoric to explore the reality of living within and relying on the social care system today.”

The TV broadcaster concluded: “Above all, this film follows Kate as she embarks on a new chapter in her marriage, trying to find a new way of living and a new way of loving, like millions of families across the country in the same boat.”

Doctors say that Derek’s Covid infection was one of the worst of any surviving patient.

Meanwhile, Kate has also found the time to front an episode of the new BBC Two series Walking With…, which sees her spend time in the Cotswolds countryside as she explores her relationship with nature.

Filming the show appeared to feel rather liberating for the Berkshire native since it was the first time she “had a whole day to myself” with no purpose than to take in the beautiful views and sounds of the countryside, Kate said on GMB.

“When I was doing a lot of mindfulness and just trying to create some space in my head when it feels like life is quite overwhelming, it’s much easier to do when you’re somewhere like this”

She lightheartedly added that it’s easier to hang on to hoping a miracle will come as it brings along a sense that anything can happen — the same miracle she would expect to see in Derek’s recovery.

Because of the impact that Covid-19 has had on Derek’s body, it’s still unclear just how much he will recuperate from the attack the virus had caused on his organs.

The TV broadcaster, who is also handling parenting on her own with daughter Darcey, 15, and William 12, has also praised her children’s “bravery” for helping their dad while continuing to fight the after-effects of the infection.

Choking back the tears before giving her speech, she said: “Thank you so much for voting. I wonder if the reason you did because our story is your story.

“We’ve all been touched by the pandemic. Whether it’s livelihood, mental health, all the other extraordinary documentaries which have been highlighted and nominated tonight, they have also been affected by the pandemic.”

Caring For Derek is slated for a release sometime in early 2022 on ITV.