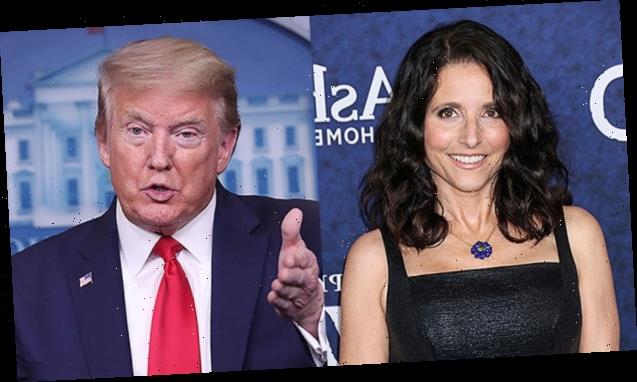 There’s a reason Julia Louis-Dreyfus won seven Emmys for Best Lead Actress in a Comedy Series for HBO’s Veep. Because she’s friggin hilarious and did such a great job at playing Vice President — and later President — Selina Meyer. Julia had the best comeback with shade towards Donald Trump, 73, when presumed Democratic presidential nominee Joe Biden, 77, announced he was picking her to be his running mate. Joe gave James Corden, 41, the scoop on his vice presidential running mate for the Democratic 2020 ticket when he appeared on The Late Late Show remotely on Apr. 21.

“Everybody’s talking, wondering who your running mate is going to be. I’ve heard as an exclusive on this show you’re going to tell us who it is. Who is it going to be,” James asked him. Joe responded, “Well, I’m going to tell you if you keep it quiet. Julia Louis Dreyfus is going to be my person. I think she has all the experience in the world. I’m not sure she’ll do it, but that’s my choice. That’s who I’m going to pick.”

On Apr. 22, JLD answered back on Twitter, taking Joe up on his offer. The 59-year-old wrote “@JoeBiden I accept but I’m a completely unqualified tv personality. Are you sure I shouldn’t be president?” The two sentences were a pure gold swipe at President Trump. He had no political experience and had his own NBC reality show, The Apprentice, before running for president. Thus making him a totally unqualified TV personality to be gunning for the highest office in the land. But he won in 2016 anyway.

As Joe pointed out in his response to Julia, “Stranger things have happened.” Fans absolutely loved it, with user @Lucy37644823 writing to both Joe and Julia, “Honestly I trust you more than the nutty TV personality we currently have.” Fan @Twotwoandone told the pair, “Even your character on Veep would be better than the orange clown we have right now.” User @SalRosell agreed that Julia was “10000% more qualified than the current president.”

Fan @gotravelgear replied to @OfficialJLD and @JoeBiden by telling them, “We’ve already tried a completely unqualified TV personality as President, Julia. Love you but no thanks!” @DevinaNunes added, “Sad thing is, as funny as all this is, you are probably infinitely more qualified and would probably do a 100 times greater job than the current incumbent.” One fan even harkened back to Julia’s iconic Seinfeld character of Elaine, with @lesleyabravanel writing, “You as Elaine Benes would be a better @POTUS or @VP than the incompetent clowns we currently have.”