Huge thanks to @RyanPfluger & #ArielLevy for the fancy profile in the wonderful @NewYorkerMag. I'm particularly pleased there's a #RozChast cartoon in the middle of it. I'm tickled pink by all of it. Hair: @CreightonBowman Makeup: @KarenKawahara Styling: @CristinaEhrlich Link: nyer.cm/UJus2uo

Huge thanks to @RyanPfluger & #ArielLevy for the fancy profile in the wonderful @NewYorkerMag. I'm particularly pleased there's a #RozChast cartoon in the middle of it. I'm tickled pink by all of it. Hair: @CreightonBowman Makeup: @KarenKawahara Styling: @CristinaEhrlich Link: nyer.cm/UJus2uo

The New Yorker has an incredible interview with Julia Louis-Dreyfus. I love Julia,but I didn’t know that much about her. This interview filled in so many blanks, and it made me like her even more. It starts a few weeks before she received the Mark Twain Award for Comedy and finishes a few weeks after. She talks about her childhood, her career, why she was miserable at SNL, and her marriage to Brad Hall. But the whole interview is framed around her cancer battle and chemotherapy treatments which were far worse than Julia ever let on. She described how brutal they got, the toll it took on her physically and how she is just now regaining her strength. But even so, she was determined to control the narrative in the press. When the paparazzi wanted to get a photo of her looking frail, she outsmarted them by posting her own images and taking that power away from them.

Louis-Dreyfus is active on social media, posting her (liberal-Hollywood) support for candidates and causes: Sally Yates, Stacey Abrams, her fellow Holton-Arms alumna Christine Blasey Ford. She also used it to keep her fans up to date on her cancer treatments. “There were people with long lenses trying to get pictures of me looking ill, and I think I kind of burst the bubble on a lot of it because of my social-media presence,” Louis-Dreyfus said, with satisfaction.

I asked if she had ever succumbed to fear or self-pity during her illness. She thought for a minute and then replied, “ ‘Am I gonna be dead tomorrow’ kind of thing? I didn’t let myself go there.” She paused. “Don’t misunderstand: I was to-my-bones terrified. But I didn’t let myself—except for a couple of moments—go to a really dark place. I didn’t allow it.”

(VEEP showrunner, David) Mandel, who has known Louis-Dreyfus for some thirty years, described his own reaction when he heard that she had cancer: “I had the sense of the walls closing in on me, and I was racked with guilt and other weird Jewishness, and I was a goddam wreck. She seemed great. Then we watched her go through the chemo and you could see its effects on her. She got thinner and thinner. We couldn’t hug her, because we were afraid to get her sick. It was the first time that—all of a sudden—she looked her age and seemed human and vulnerable.”

[From The New Yorker]

Julia said she would have a big group of friends/co-stars come to her to her chemo appointments and they would all make each other laugh, reinforcing the old cliché that laughter is the best medicine. It was so important to have those people there for her, that Julia began crying in the interview when she spoke about it. She comes across as such a genuine person. I am so happy she’s getting healthier every day and that she is willing to share her experience, even as harrowing as it was.

Julia mentioned that her sister Emma died at the age of 44 this last August. So in the last two years she lost her father, was treated for breast cancer and lost her sister to a fatal seizure. Apparently, because cocaine and alcohol were found in Emma’s system, the press tried to sensationalize her death. And, because Julia chose to grieve the matter privately, the press ran stories about the two being estranged. This poor woman. I’m so glad she has such a good support network with her family and co-workers. Of course, she has that network because she is such a good friend and partner.

Wiggy and me. We have a good working relationship. That’s all I’m going to say because I’m a lady. @veephbo #veep

Wiggy and me. We have a good working relationship. That’s all I’m going to say because I’m a lady. @veephbo #veep

#fbf to our prom photo from yesterday. #veep @veephbo 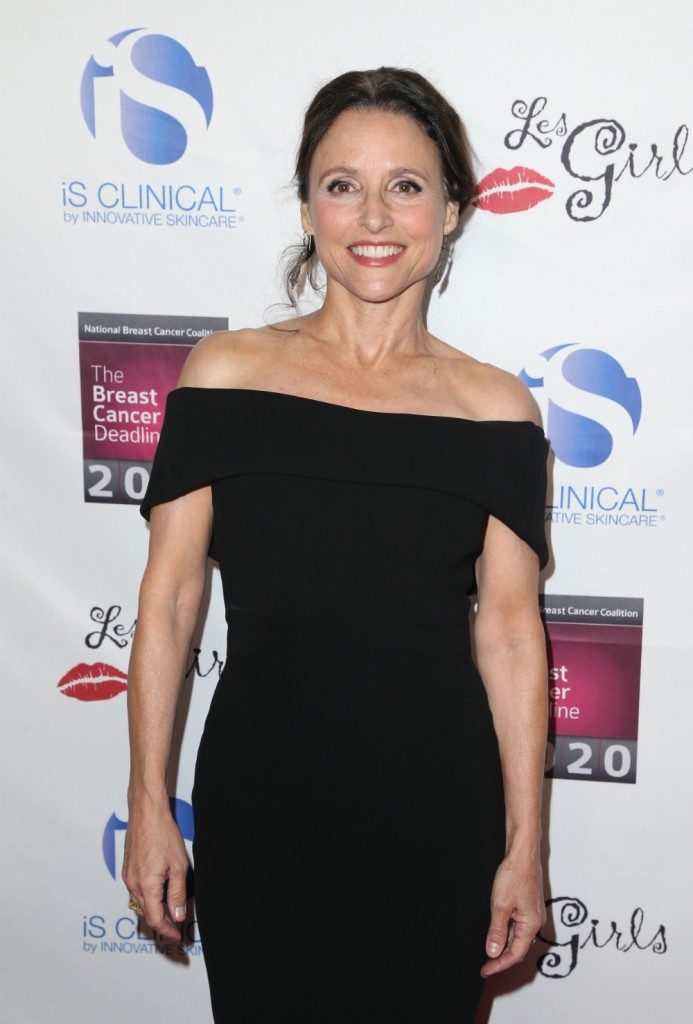