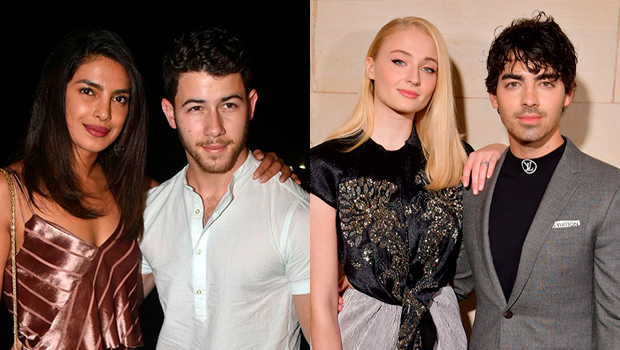 The gang is back! Sophie Turner, 22, and Joe Jonas, 29, enjoyed a double date with their usual company, newlyweds Nick Jonas, 26, and Priyanka Chopra, 36, at The Delaunay Restaurant in London on Dec. 23. Sophie and Joe were pictured near a vehicle, while Nick and Priyanka were snapped holding hands as they left the restaurant. The youngest Jonas brother, 18-year-old Frankie, also joined the dinner. Besides their food, Sophie and Joe’s upcoming wedding was also on the dinner company’s plates! SEE PICS OF THE SWEET DOUBLE DATE, HERE.

As we’ve told you on Dec. 18, a source spilled that the date has been locked and wedding invitations sent. “Picking the date was one of the hardest parts of planning, if not the hardest, because they both have such jam-packed schedules,” a source close to Sophie EXCLUSIVELY told HollywoodLife. “And of course there was also Nick and Priyanka’s wedding date to consider, so there were lots of moving parts for picking their date.” There’s speculation the nuptials will take place in France in 2019, after life coach Mike Bayer posted — then deleted — what many think is Sophie and Joe’s wedding invitation!

But when it comes to advice, we know that Sophie won’t be taking notes from Priyanka on privacy! After the Bollywood star’s marriage Nick was heavily publicized with a series of grandiose ceremonies and pictures throughout December, Sophie is opting for something much more low-key. “One of Sophie’s biggest wishes for her wedding to Joe is that they can pull it off in total privacy,” our source added, and even claimed that the Game of Thrones star instructed wedding planners “to use aliases when booking vendors.”

But the ladies of the JoBros respect one another’s differences in taste, being close friends and all! Saturday’s outing wasn’t the only time they’ve double dated, as the whole crew attended the US Open together on Sept. 4. Before that, they celebrated Priyanka’s 36th year two days before her birthday at London’s 34 Mayfair Restaurant on July 16.