Olivia Holzmacher is boyfriend Joe Burrow’s biggest supporter, and she further proved that on Feb. 13, when she gushed over him at the close of the Super Bowl.

Cincinnati Bengals quarterback Joe Burrow, 25, can always count on his girlfriend of nearly five years, Olivia Holzmacher, 23, to shower him with support no matter what a game’s outcome may be. Sadly, the Bengals lost the Super Bowl, but that doesn’t affect the way Olivia feels about Joe. In fact, following the 2022 Super Bowl on Feb. 13, Olivia took to Instagram to say the following about her boyfriend via her Instagram Story: “Still beyond proud”.

And before the ending to the game, Olivia took to her Instagram Story to show some more support. She documented her arrival to the game by sharing photos at the venue. “Good luck 9,” she wrote, referencing Joe’s jersey number. She also shared a sneak peek of her outfit, which included orange boots to match one of the Bengals’ colors.

After being selected first by the Cincinnati Bengals in the 2020 NFL Draft, this was Joe’s first Super Bowl ever. He suffered an injury during his first season with the team, but later returned as starting quarterback in 2021. And with his help, the Bengals made their first NFL playoff appearance since 1990, before making their way to the big game against the Los Angeles Rams. So this was obviously a big moment for both Joe and the Bengals.

Fortunately for Joe, he’s had the support of his girlfriend for a long time. Since meeting while attending Ohio State University together, Olivia’s been by Joe’s side through his entire college and professional career. She’s also been a staple in the Bengals crowd throughout Joe’s tenure with the team, and this evening was no different. 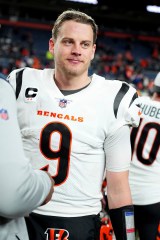 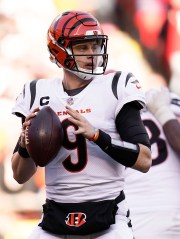 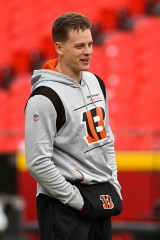