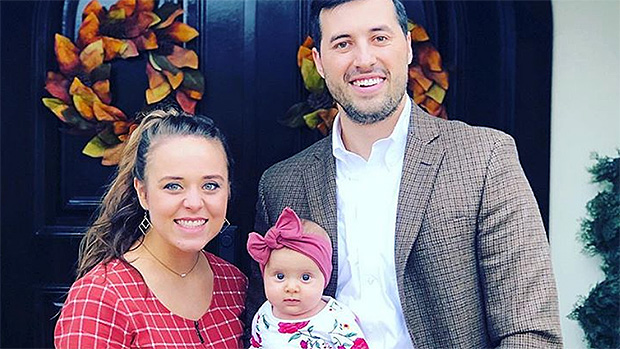 Where has the time gone? Jinger Duggar’s daughter is officially five months old, and she rang in the major milestone with a precious pic. See her sweet smile here!

Jinger Duggar, 24, and Jeremy Vuolo, 31, have been parents for five months — even though it seems like the new mom’s Counting On birth special aired just yesterday. But it’s true! The reality star couple welcomed Felicity Vuolo on July 19, and they celebrated their daughter’s first five months with a sweet photo shoot. Lying on a striped blanket beneath blocks spelling out her milestone age, the little one was wearing a bow headband, crocheted blue overalls over a white long sleeve shirt, and pink booties. But not even her precious outfit could distract from her big smile. Felicity may be teeny tiny, but she is seriously so photogenic and expressive!

Fans freak out over the little one every time Jinger and Jeremy share a shot of her on social media, which is pretty much all the time. While the new parents used to get criticized for everything from giving their daughter a nickname to covering her head with a turban, the negativity has died down lately. In fact, most of the reality stars’ followers just want to compliment Jinger and Jeremy on how adorable their daughter is. “Already growing up so fast, she’s a doll!” one fan wrote on Jinger’s Dec. 19 post, while another added, “So darling! Love her chubby little cheeks and that smile.”

So far her five months have ben exciting, featuring playdates with friends, fun time with family members and a trip to Chicago, and it’s only going to get better from here!

With so much personality already, we can’t wait to watch Felicity grow up. But until the next season of Counting On returns to TLC, we’ll have to obsess over pics of the baby girl celebrating her first Christmas.