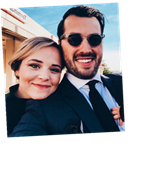 Jinger Duggar has taken fans back to where it all belong.

Back to a time before she had any kids.

Heck, back to a time before she ever took part in the act that has been known to produce kids.

Heck, back to the time before she ever held the hand of someone of the opposite sex.

For real. We’re not kidding or exaggerating here.

On Thursday, April 9, the veteran reality star took to her Instagram Stories page to post an old picture of herself and her husband, Jeremy.

Just how old? According to Duggar, it’s the first picture EVER snapped of her and her eventual soulmate.

“#firstpicturetogether,” the 26-year-old wrote on her Story, tagging her siblings as part of her post… in what we can only assume was a challenge for them to share something similar.

In the above snapshot, Jinger and Jeremy look pretty darn happy as they pose with two of their unnamed friend.

At the time, Jinger was still rocking her side sweep and tight curls while Jeremy was experimenting with a shaved side hairstyle (which we’re glad he has since abadoned).

Jinger and Jeremy met back 2015 after they were introduced by Jessa Duggar and Ben Seewald.

They started out as friends, however, before transitioning to a courtship.

“I knew Jeremy for some months before we started a relationship, so I knew he was an awesome, awesome guy,” Jinger said on Audrey and Jeremy Roloff’s podcast, “Behind the Scenes,” in April of 2019.

The two got married in November fo 2016 and welcomed daughter Felicity about two years later.

As for Jeremy, he knew Jinger was The One shortly after they met, although he was “petrified” to get involved with a reality TV family.

Vuolo has said he was relieved to learn the brunette beauty’s heart was “not being driven by the red carpet,” as he initially feared that dating a quasi celebrity would run counter to his strong values.

Instead, the husband and wife have lived a seemingly content existence ever since getting together.

There’s been recent talk of trouble in romantic paradise, but there’s also been talk that Jinger is pregnant with baby number-two.

Is there any truth to either of those rumors?

We can’t say for certain.

All we really know for sure about this couple?

They looked pretty gosh darn adorable back in the day.

Duggar Wedding Photos: Which Nervous Virgins Were the Most Awkward?Start Gallery