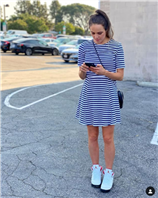 Jinger Duggar has always been considered one of the biggest rebels in her family.

Other Duggars, such as Jill, have recently struck out on their own and defied the strict system of rules and beliefs with which they were raised, but Jinger was the OG in that respect.

Back when her siblings were still following Jim Bob’s every rule, Jinger was already making her own way.

And now that JB’s offspring have begun to see the see the light, Jana is receiving well-deserved credit for being the first member of her family to question his authority.

One way in which Jinger has always expressed herself is through her fashion choices.

The infamous Duggar dress code has long been an oppressive force in the lives of Jinger and her sisters, and Jinger was the first to wear pants and shorts in defiance of Jim Bob’s rules.

Her latest pics show Jinger wearing a dress, but it’s much, much shorter than what her parents would typically allow — and it’s stylishly paired with a set of Air Jordans.

“We went on a date and ate sushi. It was a fun time and we’d like to do it again sometime,” Jinger’s husband, Jeremy Vuolo, captioned the latest photos.

Many commenters pointed out that it doesn’t look as though Jinger is eating sushi in the phorto below, but Jeremy has yet to elaborate.

Anyway, in the wake of Josh Duggar’s arrest on child pornography charges, many are wondering if Jinger has finally decided to cut ties with her family.

Strangely, it seems that she is still in regular contact with her parents.

In fact, it appears as though she’s carried some of their more problematic beliefs to Los Angeles with her.

“Their opinion on gay marriage remains the same, but they are more open to the way other people choose to live their lives in LA,” a source close to the Vuolos tells UK tabloid The Sun.

“They are bringing their children up differently to how Jinger was brought up, their parenting style is much more relaxed, and it’s likely their daughters will be even more open-minded,” the insider adds, as if to mitigate the awfulness of that previous comment.

The source added that Jinger and Jeremy have chosen not to share any more photos of their daughters, which is their right, of course:

“Although they like being in the limelight for work, they don’t want the focus to be on their children, and they choose to keep their faces hidden on social media,” the insider says.

Yes, Jeremy and Jinger have broken with family tradition by stepping away from the spotlight in some respects.

But they still enjoy the fruits of their labors, and it seems that Jinger plans to continue working in media.

“Jinger and Jeremy live in a fairly modest family home, but they are doing well when it comes to money and just bought a new Lexus car,” the source says.

“They also dine at very starry places like Craig’s and Catch, they don’t drink but they often brush shoulders with celebrities, it’s a very different life to Arkansas where Jinger grew up,” the insider adds.

“They go to watch the Dodgers play sometimes, and love little trips to the beach and to ice-cream parlors, they feel it’s a great city to bring their kids up in.”

As for the Josh situation, it seems that Jinger is one Duggar who will not be offering any support to her eldest brother.

“It’s been a very tough time for them as a family, what with welcoming a new baby during a pandemic and now Josh’s arrest,” the source says.

“They have been very outspoken about him being charged, they want nothing to do with him, and don’t want his issues to get in the way of their life in California. They feel enough is enough.”

Maybe that’s why they haven’t felt the need to step away from social media like the rest of the family.

“They stopped recording their podcast some months ago as they were very overwhelmed juggling family life with their lifestyle brand and book release.

“They are working on new episodes now and are happy about its evolution.”

So there you have it.

Jinger might have bid farewell to some aspects of the Duggar way of life, but it seems that she shares her father’s work ethic — as well as his taste for the finer things in life.