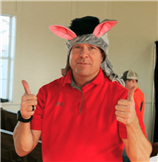 On Tuesday, February 8, a State Senate special election will be held in Arkansas District 7.

This week, Jim Bob Duggar continued his doomed campaign by participating in the Republican primary for the race.

Despite not even a week having passed since his disgraced son was convicted, Jim Bob didn’t back out.

The results are in … and they’re frankly pretty hilarious.

On December 14, 2,770 Republican ballots were cast in the GOP primary for the district.

Jim Bob only managed to wrangle 456 votes for himself … a pitiful 15.34 percent of the vote.

It might be easy for someone to attempt to defend his humiliating defeat.

After all, that means that nearly one out of every six people who voted in the district’s primary voted for him.

But Jim Bob has celebrity name recognition and prior political experience … and he still got trounced.

The primary candidate who raked in the most votes was Colby Fulfer, who received 1,387 votes.

That might sound like the population of a mid-sized high school, but it was 46.57 percent of the total votes cast.

Many are wondering how Nowlin managed to bring in even fewer votes than someone with Jim Bob’s disturbing reputation.

However, others are surprised that Fulfer is not the official GOP candidate yet.

Having not taken 50% of the vote for himself, there will be a primary runoff on January 11 between Fulfer and Unger.

One can look at the results and guess that Fulfer will be victorious, but … that’s for the people of Arkansas to worry about.

The rest of us, who zeroed in upon this particular race because of Jim Bob’s participation, can just laugh.

Make no mistake: Jim Bob absolutely deserves ridicule and rebuke for having the gall to continue this campaign even after Josh’s arrest.

Josh’s place of work was raided by Homeland Security in 2019. He was arrested in April of this year.

Jim Bob had all of the time in the world to reel in his hubris and pack up his campaign.

Instead, he doubled down, lashing out at critics and accusing opponents of employing “cancel culture,” a nonsensical buzzword.

“Like so many other families, we too have faced crises, difficulties, and heartbreak,” Jim Bob wrote at the time.

Many families face difficulties. Very few are embedded in toxic cults and have an adult son who downloaded child sexual abuse material.

“They say because our family has faced problems we should shrink away — this is why they are often so relentlessly unkind,” Jim Bob accused.

“But we cannot sit on the sidelines during a time when one of America’s most important battles is taking place,” Jim Bob insisted.

He alleged: “We are devoted to doing our part and making a difference for our children and grandchildren.”

Of course, in Jim Bob’s case, his twisted values mean making the word worse for children and grandchildren, not better.

It was Jim Bob’s own son-in-law Derick Dillard who highlighted the hypocrisy of Jim Bob’s past policy statements versus his actions.

Remember, Jim Bob was previously in office, albeit two decades ago.

His actions do not match his words, which is frankly never a good look on any politician.

A man who said that sexual predators should be put to death (while their victims are forced to give birth).who wanted to criminalize written fiction in some cases, shielded Josh from the law.

There are a billion reasons for which Jim Bob would have made a terrible State Senator.

Thankfully, he was utterly trounced in the primary.