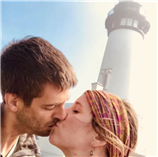 Over the course of the past two years, Jill Duggar has earned a lot of new fans.

And she’s probably the only member of the Duggar clan who can make that claim.

Most of the family has been backing away from the spotlight amid the ongoing scandal surrounding Josh Duggar’s arrest on child pornography charges.

But Jill cut ties with her problematic parents long before Josh’s arrest, a move that has helped her escape some of the harsher criticism leveled at her siblings.

In recent months, Jill and her husband Derick Dillard have been emphasizing their break from the rest of the family by engaging in behavior that Jim Bob and Michelle definitely would not approve of.

Jill has started drinking alcohol and she and Derick have launched a YouTube channel in which they speak candidly about their sex life.

Either one of those things would have been enough to get Jill disowned by her parents back in the days when she still gave a damn what they thought.

But while we’re sure the public response to her rebellion was the furthest thing from Jill’s mind when she escaped her parents’ oppressive influence, doing so turned out to be the ultimate career move.

These days, Jill is viewed by most fans as the only sane member of her massive family.

The Dillards seem to be encouraging the public to view them as rebellious outsiders by posting steamy pics like the one below, which was snapped on the couple’s recent trip to Oregon.

Unfortunately for Jill and Derick, a growing contingent of critics believe the couple has not done enough to separate themselves from the rest of the Duggars.

“[Jill and Derick] are still very much integrated into the [fundamentalist] faith no matter what they wear on the outside, they are just separating themselves from the ‘rules,’” one such nay-sayer wrote on Reddit this week.

“Jill took her boys on a normal vacation and they did normal things … She sends them to school, she has a piercing, she dresses normal … But she still holds onto vile views,” another chimed in.

“I don’t understand how Jill has so many fans just for doing the bare minimum by leaning away from the rest of the family,” a third person added.

Jill and Derick probably should have anticipated this sort of criticism.

After all, they still cling to most of the beliefs that have led to similar attacks against Jim Bob and Michelle.

Sure, they’re a bit more modern in their day-to-day lives, but the fact remains that Jill and Derick are still hardcore religious fundamentalists, adherents of the same Independent Baptist Church that has fueled so much of Jim Bob’s controversial behavior.

We don’t think any of their critics expect them to break from their faith entirely, but an ackowledgement of the problems created by the tradition they were raised in would probably go a long way.

Of course, it’s possible that these critics are being much too hard on Jill.

After all, she only recently took tremendous step forward by cutting ties with her parents.

Perhaps those who are disparaging her current way of life should give her some time and see where she goes from here.