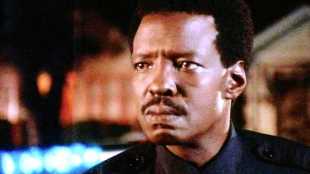 Jessie Lawrence Ferguson, the beloved actor who starred in various films, including ‘Boyz n the Hood’ and ‘Prince of Darkness’ sadly died in his home at the age of 76 on Apr. 26. Here are five things about him.

Jessie Lawrence Ferguson, 76, who played the role of Officer Coffey in the popular 1991 film, Boyz n the Hood, died of natural causes on Apr. 26. The actor’s son, Jace, confirmed his death to TMZ and revealed that he’s the one who shockingly found his dad already deceased next to his bed with the TV on in his Palmdale, CA home after seeming healthy in the days prior. “He was a strong, beautiful intelligent black man and he wanted the best for his son and all people,” Jace told the outlet. Law enforcement officials confirmed that the death was not suspicious but have yet to confirm the exact natural cause. Here are five things you should know about Jessie.

2.) His acting career kicked off in the late 1970s. He has his first major role in 1979 when he played a role in the action television series Starsky and Hutch. He went on to appear in several other television series and films, including Star Trek: The Next Generation, John Carpenter’s Prince of Darkness, and the one he’s most known for, Boyz n the Hood, in which he played a cop and appeared in a memorable scene in which he threatens a  young black man, played by Cuba Gooding Jr., by putting a gun to his throat.

3.) His death comes a week after ‘Boyz n the Hood’ director, John Singleton’s stroke. John was put in ICU and in a coma at Cedars-Sinai Medical Center in Los Angeles after the stroke and had been there for 10 days at the time of Jessie’s death.

4.) According to his IMDb page, he hasn’t played any acting roles since the early 1990s. The last role listed on the page is a 1995 short called The Chosen One in which he plays The Magus.

5.) His iconic scene in Boyz n the Hood became popular on the internet. Jessie’s role became known as “the dirty cop” and the scene has often been shared on social media and beyond in the form of memes or clips to represent anger or aggression when a person’s commenting online.