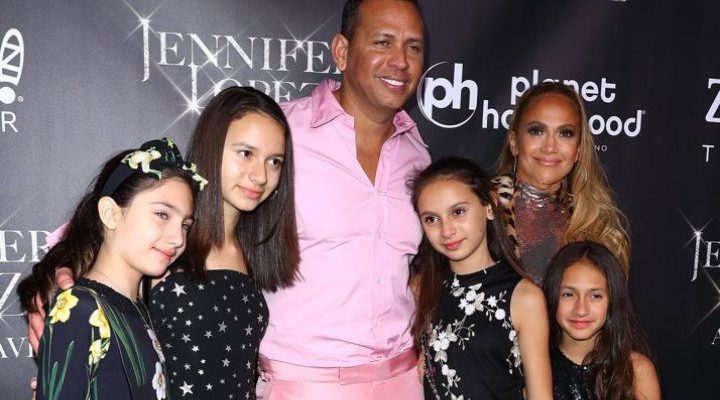 AceShowbiz –Jennifer Lopez is showing off her daughter’s musical skills in a video of her singing with boyfriend Alex Rodriguez‘s kids on Instagram.

The singer/actress posted a clip of Emme performing a cover of Elvis Presley‘s beloved “Can’t Help Falling in Love” with Alex’s daughters Ella and Natasha, who also played along with a ukelele.

“Just a lil’ ukelele by the fire, beauties allihave,” J.Lo wrote on Instagram.

The video featuring Emme comes shortly after the 10-year-old made her music video debut in her famous mum’s “Limitless” promo – Emme plays a younger version of Jennifer in the star’s directorial debut for the clip of the song, which features on the soundtrack to her new movie, “Second Act“.

The mother and daughter duo can be seen climbing a mountain against the elements in matching red suits before being thrown up into the air by a bevy of backing dancers and Jennifer’s daughter also takes centre stage in a number of shots, and even breaks into some of her mum’s signature dance moves.

“She was so amazing and I was so proud. I forgot that I was directing my first video, it was all about her. It was all about her,” the 49 year old gushed to late night host Jimmy Fallon during an appearance on “The Tonight Show Starring Jimmy Fallon” earlier this month. “And when you see the video, it’s so empowering just to see her doing this… It (song) talks about being limitless, it talks about having a second act and it’s a beautiful message as well, and it is great to share it with her, doing that. We really bonded.”