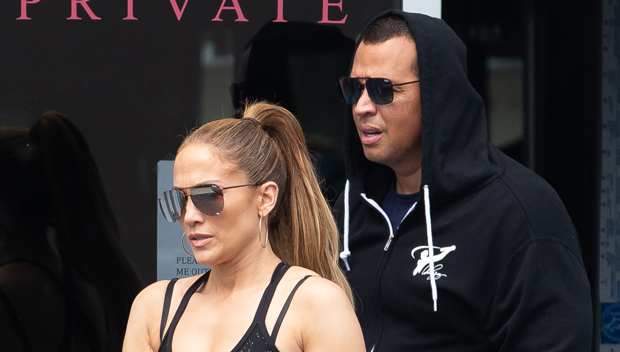 Jennifer Lopez hit the gym in Miami wearing her massive diamond engagement ring, ready for a sweaty workout. She flaunted the diamond as well as her hard her abs in a sexy sports bra.

It looks like nothing — even a a sweaty workout — will cause Jennifer Lopez to take off the massive 15 carat $5 million diamond engagement ring that fiance Alex Rodriguez gave her. The 49-year-old fitness fanatic wore the giant bauble to the gym in Miami on March 15, while paparazzi snapped away as she headed inside. In addition to flaunting her diamond, JLo also wowed the shutterbugs with her killer body, wearing a pair of skin-tight leggings that hugged her famous booty. Her totally cut abs were on display thanks to the tiny sports bra she wore on top. She’s earned that figure thanks to her rigorous workout routine.

Jennifer’s ring was completely safe on her finger as a burly bodyguard followed her into the gym. She must have met up with Alex, 32, as the couple exited the facility together a few hours and plenty of sweat later. A-Rod covered up in a black hoodie sweatshirt and sweatpants, but Jen was still in her sexy workout attire. He sweetly held her hand as she led them to their awaiting ride.

Their Miami gym routine is a far cry from where they were a week ago at this time. The couple had jetted off to a romantic weekend trip to Baker’s Bay in the Bahamas where Alex proposed to Jennifer on March 10. From photos taken of the moment, he got down on one knee with the ocean waves washing in on the beach behind him, holding out the ring in its box while Jennifer put her hands up to her mouth in surprise. She then let him slip the 15 carat emerald cut stone onto her finger before bending down to kiss her new fiance.

A-Rod was the first to share the news, with an Instagram pic holding on to her hand with the massive diamond glowing in the light of a beach campfire with the caption “she said yes.” Jennifer then shared it on her own page, giving a series of heart emojis as her caption, probably lost for words at both the size of the stone and Alex’s romantic proposal.