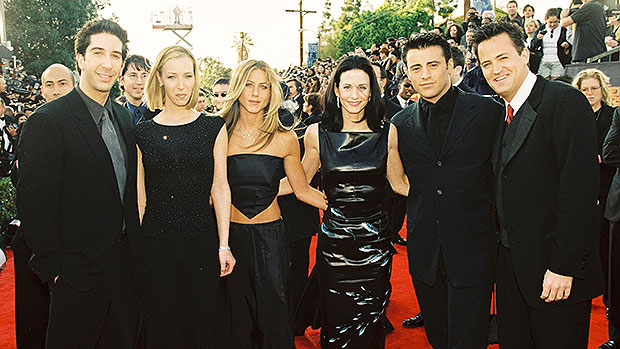 Jennifer Aniston got real about which of her former ‘Friends’ co-stars are pro- & anti-reboot! Here’s who needs convincing about doing a revival!

Jennifer Aniston may be completely up for a Friends reboot or revival… but some of her former fellow cast members are not so keen on the idea. “The girls always say we would love to do it again, and the boys are a little less excited about it for some reason,” she told James Corden on The Late Late Show. “So we’ve decided that we’ll just do, like — and I’ve said this before — we’ll just do, like, a remake of The Golden Girls in, like, 40 years… Just kind of go out on wicker chairs, you know what I mean?” We do know what you mean, and we are here for it. Matt LeBlanc, David Schwimmer and Matthew Perry… it’s up to you to PIVOT your opinion and make a revival happen.

Jen previously caused a flurry of speculation when she didn’t exactly shoot down revival rumors over the summer. “Before that show [Friends] ended, people were asking if we were coming back. Courteney [Cox] and Lisa [Kudrow] and I talk about it. I fantasize about it. It really was the greatest job I ever had. I don’t know what it would look like today, but you never know,” she told InStyle. “So many shows are being successfully rebooted.”

In the Jan. 2019 edition of ELLE, Aniston talked about how she feels that she had successful past marriages, despite their ending. “To stay in a marriage based on fear feels like you’re doing your one life a disservice,” she said. “When the work has been put in and it doesn’t seem that there’s an option of it working, that’s okay. That’s not a failure. We have these clichés around all of this that need to be reworked and retooled, you know? Because it’s very narrow-minded thinking.”

Jen recently stopped by Ellen, and she could not stop gushing to host Ellen DeGeneres about her trainer, boxing coach Leyon Azubuike. “I feel fantastic,” Aniston admitted as Ellen brought up a picture of him on the screen behind her. “Beautiful Leyon, he’s just fantastic! Look at that smile! Seriously, Leyon is my gentle giant and he calls me ‘champ’ and it’s not weird.”

We’ll keep you posted with all of the latest Jennifer Aniston news. In the meantime, check out all of her most recent pics from her ELLE cover in our gallery above.