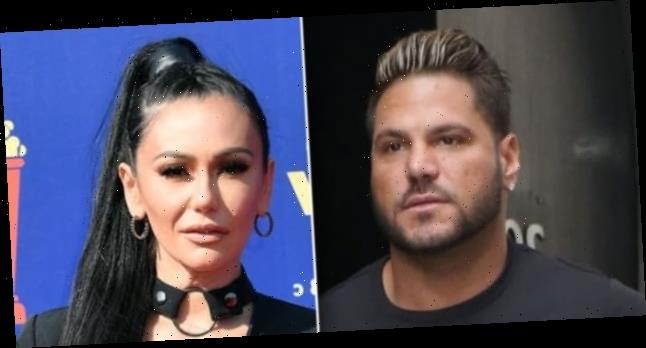 Recent episodes of Jersey Shore have been without Mike Sorrentino or Snooki, two of the series’ MVPs from day one.

They had pretty solid reasons for not partying in Vegas with the rest of the crew (Snooki was pregnant; Sorrentino was in prison), but their absences have been keenly felt at times, as the saga of Vinny’s Chippendale’s adventure has felt a bit stale at times.

Fortunately, Ronnie Magro and Jenni Farley have really stepped up to the plate in recent weeks by allowing their lives to fall apart both on and off camera.

Okay, in JWoww’s case that statement is a bit of an exaggeration.

Sure, Jenni’s boyfriend groped Angelina Pivarnick in last night’s episode, and he generally seems like a giant douche bag, but on some level, she must have known 24 was nothing more than a rebound fling.

When you’re talking Ronnie, however, it’s almost impossible to overstate how much this dude has effed up in recent weeks.

In case you somehow haven’t heard, Magro was tased and arrested earlier this week following a confrontation with Jen Harley, the mother of his 1-year-old daughter.

Magro stands accused of assaulting Harley and threatening her with a knife.

Take Snooki, for example, who decided to openly victim-shame Harley during an interview with Mike on her podcast this week.

Nicole attacked Jen for wearing clothing that doesn’t properly conceal her bruises in order to make a “big thing” out of the attack.

Clearly, that’s some horrendous BS, and we hope others will join us in calling on Polizzi to apologize.

Other Shore cast members have kept silent with regard to the attack, including Farley, who developed a friendship with Harley in recent months.

In fact, she controversially reached out to Jen during the gang’s recent Vegas adventure.

(Though to be fair, she was probably encouraged to do so by the show’s producers, as a whole lot of nothing was going on in Sin City.)

Last week, Us Weekly caught up with Ron and asked him about the complex dynamic between the Jens and himself.

Magro theorized that JWoww was so fixated on him because she had “a bunch of stuff that she just didn’t want to focus on,” meaning her divorce from Roger Mathews.

“You get to a place in your life where you can’t control what other people do. It’s about how you react,” Ronnie told the tabloid.

“You’re going to try to push everything away from you as much as you can. She was going through a divorce, she’s got a new boyfriend, her son,” he went on.

Asked about the future of his friendship with Farley, Ronnie continued:

“If you’ve seen me and Jenni throughout the years, me and her go at it. We’re brother and sister! But we love each other.

Yep, sounds like the folks at Us received a dose of the new and improved sober Ron.

The only problem is, just hours later, he was allegedly doing coke and assaulting his girlfriend.

We’re thinking Farley was right to side with Harley from the start, and we hope she’s continued to support her new similarly-named friend.