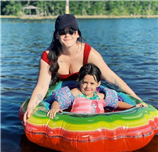 It has come to this for Jenelle Evans:

She’s been forced to go online and defend her husband from allegations that he recently murdered a number of baby chickens.

Allegations brought on by the couple’s daughter, we should emphasize.

And these allegations that seem pretty darn believable… considering David Eason did admit to killing his own family’s dog in 2019.

For those that missed the latest controversy surrounding Evans and Eason, a quick refresher:

A few days ago, Eason uploaded a video to TikTok.

The footage was captured by a fan and then sent to our friends at The Ashley — and it depicted four-year old Ensley calmly taking a glimpse at some chicks inside of the family’s coop.

“Remember you killed the baby chicks?” she says to her her dad at one point.

After the toddler begs her father “Don’t shoot them again again! Then I’ll be so mad,” Eason asks Ensley what the heck she’s talking about.

“If you kill them again I’ll be so mad!” the little girl reiterates.

“Girl you have lost your mind,” David fires back at his daughter, growing angry and denying the charge. “What are you talking about?”

They go back and forth like this for a little bit longer, with David continually being accused of killing more animals and David scoffing at such a notion… before the video cuts out.

In a Instagram Q&A session on Tuesday, Jenelle finally addressed this topic, revealing why she had kept quiet in the week or so since her child accused her husband of another murder.

“Why won’t you address the baby chick situation?” one of Jenelle’s followers asked, to which the former Teen Mom star replied:

“Because it’s no ones business but my own. That story never happened.”

Now… we know Ensley did, in fact, accuse Eason because he was caught on video.

So Evans must be claiming here that David never harmed any of the birds, essentially calling her own kid out as a liar.

Eason, for his part, has responded to the situation as only he can: By mocking it and anyone out there who believes it.

“You know, just out here hunting ‘baby chicks,’” Eason wrote on social media, along with a photo of The Land.

Y’all are gonna want to see this! Jenelle gets a lil buzz on at the beach and we filmed our dinner at the Lazy Pirate.

Jenelle was so funny, she is always such a fun person to be around.

I’m so lucky to have her, y’all think we fight and argue all the time but we actually laugh and joke around more than anything else!

Go ahead and feel free to talk crap in the comments because we will laugh about that too… if we ever see it.

Sort of explains a whole lot, doesn’t it?

In sticking up for how his wife is “fun,” Eason points to a recent outing during which Evans got drunk around her young kids.

This may not exactly be the defense he thinks it is, you know?