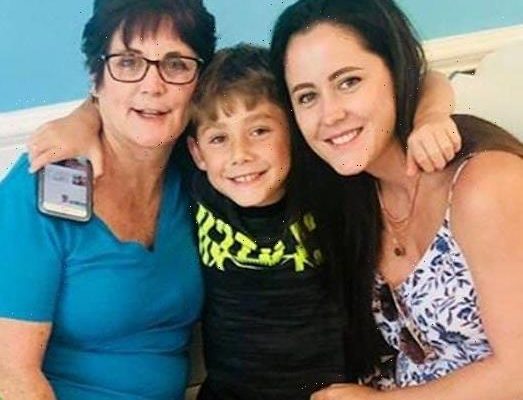 Jenelle Evans’ eldest son Jace — who just celebrated his 12th birthday last week — has been in the custody of his grandmother, Barbara Evans, since he was an infant.

Needless to say, at this point, Barbara is far more of a mother to the kid than Jenelle ever was or probably ever will be.

So when a decision about Jace’s health needs to be made, the decision is left up to Barbara, not Jenelle.

But even though that’s been the case for Jace’s entire life, it seems that Jenelle is still planning to throw a fit every time the kid’s legal guardian does anything without her permission.

The latest trouble began just days after Jace’s birthday, when Babs decided to take advantage of the fact that he’s now old enough for the Covid-19 vaccine.

Barbara shared the news with her Instagram followers earlier this week.

“Just turned 12 and got my first Covid vaccination,” she captioned the photo below.

It wasn’t long, of course, before Jenelle chimed in with her take on the situation.

“Ask me how I feel,” Jenelle wrote in the comment section, adding:

As The Ashley’s Reality Roundup reports, commenters overwhelmingly sided with Barbara on this one.

“Stop blaming your mother for your failures as a mother,” one person wrote.

“You showed time and time again that you chose men over your children and still do to this day and that is the truth. Unfortunately you want to stay in denial over the last decade,” another added.

“You gave up your rights to have a choice or feeling about what is in Jace’s best interest.”

“Why should anyone ask you? You signed him over to her so you could choose a life of drugs and men over him,” a third chimed in.

Perhaps sensing that she was outnumbered, Jenelle then took the fight to her own Instagram page.

She posted multiple Stories in which she vented her outrage, and she even accused Barbara of being a negligent guardian … by getting Jace proper medical care.

“Try to push me out of his life all you want, but I will still fight. I’m not giving up,” Jenelle wrote.

“It’s crazy to think you care more about a shot than a child’s birthday. Posting all for attention and clout,” she added.

Jenelle has been a Covid denier and anti-vaxxer for quite some time, but the vaccination situation is certainly not the first time that she’s complained about Babs’ parenting.

In fact, back in May, she said that the two of them disagreed about so much that they mutually decided to stop communicating with each other.

“We will probably not ever repair our relationship, but if I do get custody I will continue to let Jace have a relationship with her,” Jenelle said at the time.

“They’ve been together for such a long time and I don’t want to be petty and be petty against Jace just because I have something against my mom.”

So Jenelle cut off contact with her mom and then complained that Babs made a decision without consulting her?

That’s Jenelle logic for you, folks — it’s too stupid to argue with!