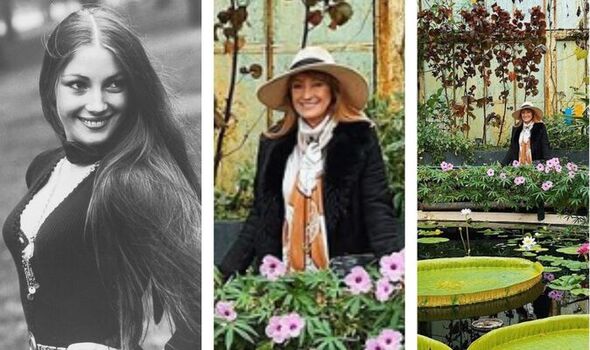 Jane Seymour shared a snap from one of her “favourite places ever” yesterday – the Waterlily House at Kew Gardens in Richmond.

In a jokey post released to her Instagram account yesterday, the legendary Jane Seymour prompted speculation she could be in the running for a future role posing as James Bond himself.

Jane Seymour, who also shares her name with a former Queen of England, shared a snap from a visit to London’s Kew Gardens when she made the witty quip that had everyone wondering.

“Call me Pond… Jane Pond!” she declared with a wink, punctuating the slogan with an egg-timer emoji that suggested it was only a matter of time before her witty wordplay became a reality.

The joke had her 265,000 Instagram devotees declaring that she would be “the perfect first woman Bond”.

Meanwhile, Jane gave a broad smile as she was captured at Kew Gardens’ Waterlily House wearing a smart black outfit and a broad-brimmed hat.

In comparison, here is Jane Seymour almost 50 years earlier back in 1973, when she performed alongside Roger Moore as James Bond in the movie Live and Let Die.

Jane Seymour might be 71, but her near flawless looks, including a gorgeous head of long locks, suggest otherwise.

Jane Seymour teased that her head was “in the clouds”

Jane Seymour looked as though her mind was somewhere far away as she drove to Kew Gardens in an image uploaded yesterday.

Jane Seymour has also spent the autumn season in Ireland

She shared a snap of herself amongst the falling leaves, telling the world that she was “enjoying the beautiful colours… and crisp breeze”.

Jane Seymour from the original movie Somewhere in Time

Jane Seymour had this stunning snap taken 43 years ago in preparation for the promotion of the film Somewhere In Time, when it was released the first time around.