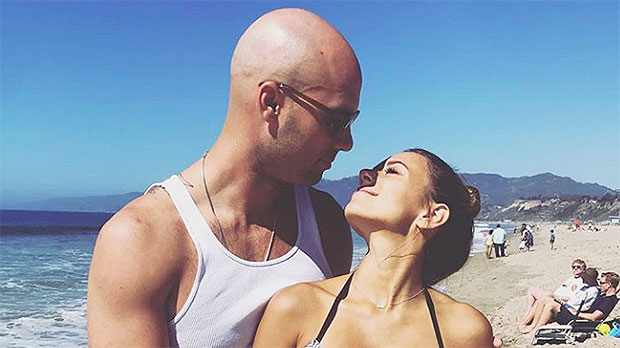 Jana Kramer has suffered a total of five miscarriages while growing her family. So how did she finally conceive her son? Jana opened up EXCLUSIVELY to HL.

Jana Kramer, 35, and her husband Michael Caussin, 31, welcomed a beautiful baby boy on Nov 29. Jace, whose name means healing, came just under three years after Jolie Rae‘s Jan. 2016 birth — but the couple had a hard time conceiving between their two little ones. With one round of IVF and two natural pregnancies, Jana suffered three miscarriages in that time period. The Whine Down podcast host has detailed this experience in a vlog, but opened up to Hollywoodlife.com EXCLUSIVELY about how she and Michael were finally able to deliver a healthy newborn last month. “My system was so incredibly off, and I didn’t know when I was ovulating or that I was ovulating late,” Jana explained.

But with an Ava Fertility Bracelet, which measured her pulse, stress rate and temperature, she was able to pinpoint the days she could conceive. While in the past she’d ovulate on the 12th and 13th of the month, the bracelet actually tracked her at the 16th and 17th. And sure enough, she became pregnant with Jace after realizing that! So for women struggling with infertility, her advice is simple. “If you’re having a hard time, invest in things,” Jana said. “I would do everything and try anything. Even if it’s a little more expensive, what is this worth to you?”

So  now that her “little angel” is here, how is the family of four adjusting? While Jana does “want Jace to sleep,” she loves her one-on-one moments with him at night. “I give him a little kiss and he twitches and smiles, and he’s just the cutest thing,” she said, adding that even though he has her dimples, he’ll probably look like Michael. After all, he looks just like Jolie did as a baby, and she’s the spitting image of her former NFL-playing father now!

Welcome to the world, Jace Joseph Caussin. Our hearts are so full. Thank you to all of our friends and family..and all of you who have supported Mike and I, and our growing family. We are so blessed, and a huge thank you to @avawomen for helping us grow our family. #rainbowbaby #blessed

Welcome to the world, Jace Joseph Caussin. Our hearts are so full. Thank you to all of our friends and family..and all of you who have supported Mike and I, and our growing family. We are so blessed, and a huge thank you to @avawomen for helping us grow our family. #rainbowbaby #blessed

And as for Jolie, she’s on track to be the best big sister ever! “I was really worried,” Jana admitted, “but she’s been so incredible and was so excited to see him in the hospital. She always wants to hold him and introduces her brother to people. She’s helpful with changing the diaper and just being a big sister helper.” Aw!

So with their little ones getting along so well at home, will Jana and Michael be trying for a third baby or have they reached their sweet spot? “Six months ago, yeah, I was definitely done. I was so sick in the first trimester, but now I don’t know. We’ll see,” Jana said, joking that with her bracelet she might just be “an ovulating machine.”

Only time will tell! For now, we’re just so happy for the couple and their beautiful growing family. She finally got the boy!