In a new interview, Jake Gyllenhaal revealed the endearing reason why filming love scenes with Jennifer Aniston in the 2002 film ‘The Good Girl’ was ‘torture.’

Jake Gyllenhaal admitted that starring opposite Jennifer Aniston in the early aughts was “torture” due to his unrequited crush. The actor, 40, reflected on working with the star, 52, on the 2002 romance drama The Good Girl while on The Howard Stern Show on October 5. When asked if the duo’s love scene was “torture,” Jake said yes and added that love scenes are always “awkward” in general.

“Oh yeah, it was torture. Yes it was,” he laughed in response, referencing his crush on the Friends alum. “But it was also not torture. I mean, come on, it was like a mix of both.” The actor added that “love scenes are awkward” by default, given that “there are maybe 30, 50 people watching it.” He continued, “That doesn’t turn me on. It’s oddly mechanical, and also it’s a dance. You’re choreographing for a camera.”

“You can get in it but it’s like a fight scene. You have to choreograph those scenes,” Jake said, adding, “The pillow technique was used. That was just preemptive and used generally always when actually in a horizontal place in that movie. I think that was actually a Jennifer suggestion, she was very kind to suggest it before we began. She was like, ‘I’m putting a pillow here.’” 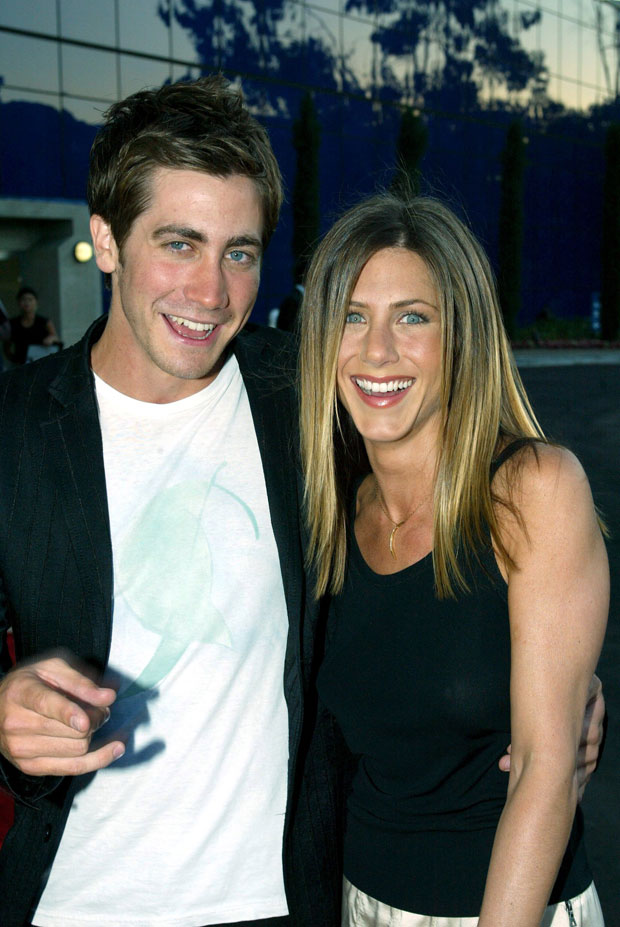 Jake previously admitted to harboring a crush on Jennifer “for years” after filming the movie during an interview in 2016. “I will say, I had a crush on her for years, and [so]  working with her was not easy,” he said while on The Jess Cagle Interview. “That’s all I’m going to say. It was lovely. It wasn’t hard, that’s what I would say.” During that time, Jennifer was married to Brad Pitt, and Jake went on to date Kirsten Dunst, so a relationship was simply never in the cosmos.

The actor has been dating French model Jeanne Cadieu since 2018. The couple only recently made their red carpet debut at the New York premiere of The Lost Daughter — written and directed by Jake’s sister Maggie — on September 29. During his chat with Howard Stern, Jake made a rare comment about his relationship, declaring his love for his partner of three years. “I love her so much and she’s just such a good person,” he said, later referencing their red carpet debut: “My sister grabbed her and pulled her on that red carpet and I was like ‘Oh yeah, it’s family.’”