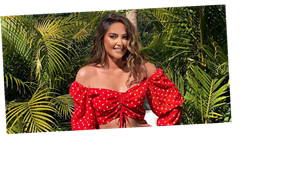 Jacqueline Jossa has revealed she is keen to return to EastEnders following her exit in 2018.

The actress, who became a household name playing Lauren Branning on the BBC soap, shared her plans to one day come back to the character and it could be in the next five years.

Jacqueline, who was crowned Queen of the I'm A Celebrity… Get Me Out of Here! jungle in 2019, has achieved success since leaving the programme but says the exit wasn't "goodbye forever". "It doesn't feel like it was a goodbye forever, definitely not, well not from my end anyway. I would love to go back someday. I could hobble back in on my walking stick one day," she told the MailOnline.

And fans may not have to wait too long as Jacqueline says that she reckons within the next five years she may reappear: "I think that sounds better than me going back tomorrow, yes."

Jacqueline's exit storyline from EastEnders played out in Christmas 2017, when her character Lauren and sister Abi Branning both plunged from the rooftop of the Queen Vic.

While Lauren survived after having surgery on her fractured pelvis, her sister Abi ended up on life support which was then switched off.

It was the loss of her sister that led Lauren to quit Walford and Max Branning later revealed in a later episode that she had moved to New Zealand. It's not the first time mum-of-two Jacqueline has spoken of a return to EastEnders, as it was rumoured BBC soap bosses had asked her to make a comeback last year but chose to appear on I'm A Celeb instead.

And during a Q&A on Instagram, Jac replied to a fan's question about a return to the square, saying: "Maybe one day. She's not dead yet."

The fan-favourite character would surely be welcomed by soap viewers but for now Jacqueline is enjoying her success following her jungle win.

Following the celebrity reality competition, Jacqueline went on to sign a six-figure deal with online fashion brand In the Style.

Her subsequent collections have sold out in record time and she's been happily posting new updates for shopping fans on Instagram.

She's shared new items for her collections as well as flexing her vocals posting snippets of her singing Disney songs.