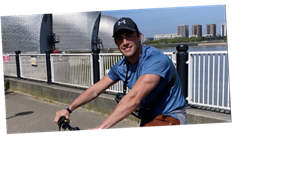 Jack Fincham has spoken out after being slammed for seemingly ignoring the government's social distancing rules amid the coronavirus pandemic.

On 15 April the 28 year old, who recently welcomed a newborn baby girl Blossom, took to his Instagram to share several photos and videos of himself on a bike ride with his friends in central London.

Wearing a blue t-shirt and a black cap, the Love Island star got in his "daily exercise" by touring St Katharine Docks Marina.

Another photo, shared by one of his pals Bill, showed Jack posing alongside his brother Oliver and his two friends with a backdrop of the River Thames and The Shard.

Having seen reports claiming that he broke the UK lockdown rules, Jack took to his Instagram Stories to clear up the confusion as he explained: "CLEARLY over 2 metres from anyone the person I am standing closest to is my brother who I live with.

"I didn't go within 2 metres of anyone I didn't live with all day. That's all".

His friend Bill also commented on the claims in an Instagram post as he explained: "We stuck by the social distancing rules, 1 hour excercise & 2 meter rule only stood near eachother to take a pic!!" [sic] alongside a laughing face.

The coronavirus has lead government officials to place numerous rules to protect the public from landing in the care of the NHS staff, who have been working round the clock to save lives.

It comes as Jack recently revealed the heartbreaking news that his grandmother has died.

He took to Instagram to share a touching tribute to his nan Kath alongside some gorgeous photos of the pair together.

Jack, who recently found out just how quickly his fame has diminished while at Cheltenham Festival, posted seven photos of her to his 2.2 million followers, claiming she was "the best nanny".

He wrote: "Rest in peace my beautiful Nanny I love you and miss you so much already Nanny Kath.

"I told you everything and you always gave me the best advice.

Love Island stars: Past and Present

"You were the rock of the family and not a day will go by when I won’t think of you.

"Love you so much you were the best Nanny I could of ever asked for I have so many amazing memories with you.

"I know you'll be looking down on us all. your finally at peace now." [sic]