Pancake fail! A 17-year-old hostess at IHOP went viral on TikTok after she failed to recognize Adam Sandler when he asked for a table. 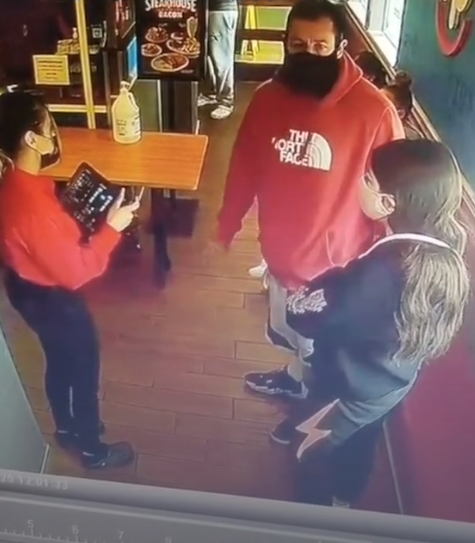 The clip, which was posted on TikTok on Monday, April 26, revealed that the Grown Ups star walked out of the restaurant after being told it would be a long wait. Rodas didn’t notice that it was the comedian at the time, but later pleaded with Sandler to come back and eat at the breakfast joint via social media.

“Pleaseee come back,” she captioned her TikTok video, which showed her face covered with a clown filter.

In addition to posting the restaurant footage of her celebrity fail, Rodas wrote, “Not realizing its Adam Sandler and telling him it’s a 30min wait and him ofc leaving bc hes not going to wait 30mins for IHOP.”

More than two million people have “liked” the funny video, while more than 17,000 users have commented on it.

Two days later, the teenager spoke out about why she didn’t instantly know it was the Wedding Singer actor standing in line. “He had a big beard. I’ve never seen Adam Sandler with a beard and the mask didn’t help,” she said in a TikTok video on Wednesday, April 28.

Sandler’s rep later confirmed to HuffPost that the Happy Gilmore star was in the video but didn’t give any further comment.

Rodas, for her part, told the New York Post that it “wasn’t until a customer walked in about 15 minutes later saying, ‘Adam Sandler was outside,’” that she realized she had “spoke to Adam Sandler!”

Celebrities Who Are Generous Tippers

There’s no telling what would have happened if the Waterboy star had been seated — but he could have become a big tipper like many of his fellow Hollywood friends.

Drew Barrymore, for example, is a “great tipper” according to Ugly Betty alum Ana Ortiz, who was a bartender before making it as an actor. She tipped “100 percent of the bill both times I served her,” Ortiz, 50, told Latina magazine in April 2008.

After being inspired by his Blue Bloods costar Donnie Wahlberg, Tom Selleck paid it forward in December 2020 while dining at Elio’s restaurant in New York City. He left a $2,020 tip on a $204.68 bill, adding a handwritten note to the server.