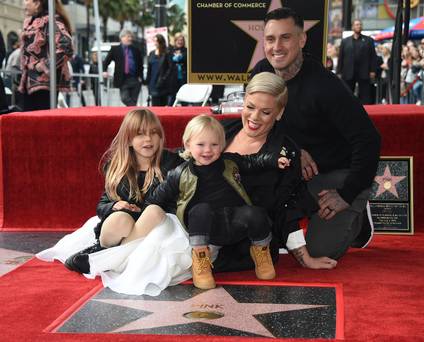 Pink has vowed to stop sharing photos of her children online.

The ‘Walk Me Home’ singer – who has Willow, seven, and Jameson, two, with husband Carey Hart – admitted she recently “cried” when trolls slammed her and even threatened to report her to children’s services after she shared a photo of herself and her kids with a pelican, only for posters to condemn her for the fact her son wasn’t wearing a nappy.

And as a result, Pink – who later reposted the photo with Jameson’s genitals scribbled out – has now vowed to stop sharing pictures of her family life.

She said: “I didn’t realise, I didn’t look at it that way. It was a pelican, it flew into our room and spent two hours with us which it was incredible and then I got worried it was sick so I called animal rescue, no one wanted a pelican… We tried to give it smoked salmon – it was the only thing we had that was like fish – it was just an incredible experience for my family…

“[People wrote] some of the nastiest things, I cried, I cried so hard after that because I like to share my family. It’s the proudest moments in my whole life.

“I’m prouder of my kids more than anything I’ve ever done and I just won’t share them anymore.

“I understand people saying you should be more careful, you’re in the public eye, and they’re right but there’s a nice way to say it, there’s a kind way. There’s a way to do it.”

But the 39-year-old star also admitted she thinks it’s the right time to stop being so candid with photos of her kids now that her daughter is getting older.

She added: “It’s also a good time though, Willow is seven now so it’s time to pull her back.”

During her interview on ‘The Ellen DeGeneres’ show, the host also aired one of Pink’s Instagram clips featuring Jameson playing with cars and exclaiming, “Awwww damnit” when his game went wrong.

And the ‘Raise Your Glass’ hitmaker admitted she didn’t know how to respond when there was a kind comment amongst a lot of negativity.

She said: “People go in on me all the time on social media, and [on this video] someone wrote, ‘Nice language, I bet he gets that from you’ and then somebody wrote, ‘I’m a speech pathologist at the institution of blah blah blah and I thought his intonation and his timing were perfect, you have a very smart son’ and I’m just reading it like [shocked], ‘I don’t understand positivity’. “

Pink isn’t afraid to call out the trolls on her social media accounts.

She said: “I have to sometimes. I feel like I can change their minds, I’m all about injustice, I don’t like it or how people are anonymously, rude and mean spirited, so if I have time, I go in.”