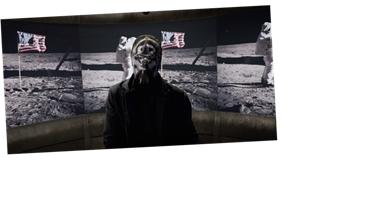 Spoiler alert: the rest of this article contains spoilers for a key scene in the Watchmen premiere. If you haven’t seen the episode yet, now’s your chance to stop reading.

Viewers who tuned into the first episode of HBO’s Watchmen were treated to a number of things: stunning visuals, impressive world-building, some top-notch acting, and, oh yeah, an absolutely wild scene that took place in something called “The Pod.”

With original music by Trent Reznor and Atticus Ross blaring, the character Looking Glass (Tim Blake Nelson) stepped into the aforementioned “Pod,” and intensely interrogated a suspected member of a white supremacist group known as the Seventh Kavalry; the technology in the scene appears to be from the future; so how did Watchmen pull this off?

As it turns out, “The Pod” was real, a set put together by production designer Kristian Milsted, who Nelson was thrilled to praise. “A great production designer makes your life really easy, because you just walk into a reality,” he said in an interview with Men’s Health. In this case, reality was a sci-fi level interrogation device. And, once again, it. was. intense. The repeated refrain “Are you a member of, or do you associate with members of, the white supremacist organization known as the Seventh Kavalry?” became hypnotizing in it’s bluntness, intensity of course aided by the Reznor and Ross’ music blaring in the background.

It’s the first truly substantive scene of the series for Nelson’s Looking Glass character, who before that point only appears briefly in conversation with Don Johnson’s Judd Crawford, and again during a secret police force meeting.

“Just the way it felt sitting in that chair, and the shape of The Pod, and the strange grittiness of it—I didn’t imagine it was going to be a reality of this show,” Nelson said, sounding amazed the concept became a reality. “But of course it is, because it’s such an analog world, even though it’s in the future. It made a scene I already knew was going to be really, really good, an exciting one to film.”

As Looking Glass questions the suspect, the images surrounding him change every few seconds, slide show style. From utter darkness, to a confederate flag, to a wheat field, and more, each image not only encompasses the entirety of the space the scene exists in, but off Looking Glass’ chrome mask as well—blasting the images right back at the man being interrogated.

The scene continues, and as the questioning gets more and more intense, and Reznor and Ross’ score ramps up, the camera settles more and more on Looking Glass’ empty, faceless mask. In turn, this allowed for quite possibly the most subdued performance of Nelson’s long and impressive career—the mask entirely envelops his face. “I knew that I wanted to play him as economically as possible, in terms of movement, and volume,” he said. “And in in the pod scene, in particular, and in the first episode, the set and the situation made that really easy.”

And the images projected on the screens—the wheat field, the confederate flag, the paintings, Rosie the Riveter, swastikas, and more—they weren’t really there, edited into the frame in post-production. But despite filming surrounded by an empty canvas, Nelson knew what would eventually surround him. “I was literally imagining them in my head,” he said. “As as the scene was playing out, and the Seven K character was squirming and answering the questions.”

The scene was undeniably intense, and the fact that Watchmen introduced it as a piece in the world in its very first episode means there will certainly be even more involved pod scenes down the line. We’ll just wait and see how showrunner Damon Lindelof uses this piece to play into the even larger picture of the entire show’s themes and storyline moving forward.