Yesterday, the world watched in open-mouthed horror as Notre Dame Cathedral, an 800-year-old monument in Paris, France, burst into flames. As the Paris fire department scrambled to saved the priceless relics and artworks inside, French officials gradually started to take inventory of what had been recovered from the wreckage and what had been lost forever, with many — particularly Catholics, who had flocked to the city to celebrate Holy Week — gathering outside to sing hymns and mourn.

But while the spire of the building — which famously dates from the 19th-century restoration, not from medieval times — and much of the roof are destroyed, the iconic facade, the three large stained glass rose windows, and much of the internal structure, as well as many of the priceless artworks and relics contained within, appear to have been saved. “I have to say, it’s terrible, but it also appears it could have been much worse,” says Jeffrey Hamburger, a professor of art history at Harvard University whose research focuses on the art of the High and later Middle Ages.

The fact that the building did not collapse — a concern in the hours immediately following the blaze — serves as a “powerful testimony to the skill of medieval builders,” Hamburger says. He credits the survival of the structure to the building’s iconic rib vaulting and flying buttresses, which prevented collapse. “It’s worth remembering why they went through the trouble building it this way — it wasn’t for aesthetic reasons, it was for fire-proofing,” Hamburger says. “In a way, what we have here is proof of concept.”

In the wake of the destruction, French billionaires such as Francois-Henri Pinault (perhaps best known in the United States as the husband of Salma Hayek) and Bernard Arnault, chair of luxury goods brand LVMH, have pledged hundreds of millions of dollars toward the reconstruction of the cathedral, and Prime Minister Emmanuel Macron has issued a public statement on Twitter vowing to rebuild. Yet the damage wrought by the Notre Dame fire has also raised important questions about the cathedral’s symbolic significance in an increasingly divided France, and how to rebuild (or which version of the cathedral should be rebuilt) going forward — and in some ways, these questions are one and the same.

Over the course of the past few centuries, the cathedral has played a role in major historical events, from the coronation of kings to the crowning of Napoleon to the requiem mass of President Charles de Gaulle. And Notre Dame has served as a symbol of not just French historical identity, but Catholicism in general. “It has a double meaning,” says Jean-Robert Armogathe, a French Catholic priest and historian who served as the chaplain at Notre Dame from 1980 to 1985. “It has been the center of Catholic life and of France for 800 years.” As Armogathe points out, it is also quite literally the center of Paris: a gold star outside the cathedral marks Point Zero, the supposed center of the city.

But for some people in France, Notre Dame has also served as a deep-seated symbol of resentment, a monument to a deeply flawed institution and an idealized Christian European France that arguably never existed in the first place. “The building was so overburdened with meaning that its burning feels like an act of liberation,” says Patricio del Real, an architecture historian at Harvard University. If nothing else, the cathedral has been viewed by some as a stodgy reminder of “the old city — the embodiment of the Paris of stone and faith — just as the Eiffel Tower exemplifies the Paris of modernity, joie de vivre and change,” Michael Kimmelmann wrote for the New York Times.

Despite politicians on both sides of the French political spectrum discouraging people from trying to politicize the Notre Dame fire, it would be a mistake to view the building as little more than a Paris tourist attraction, says John Harwood, an architectural historian and associate professor at the University of Toronto. “It’s literally a political monument. All cathedrals are,” he says. For centuries, the cathedral was the seat of the bishop of the Catholic Church at a time when there was virtually no distinction between church and state. “It was the center and seat of political power not just in Paris, but in France,” he says. “And that remained the case even after the French Revolution and through successive revolutions and political power and regimes.”

Notre Dame acquired even more overtly nationalist symbolism following its renovation in the Nineteenth century by Eugène-Emmanuel Viollet-le-Duc, who is widely considered the godfather of modern historical architectural restoration. Viollet-le-Duc sought to restore the edifice’s Gothic past, a style that was largely unpopular at the time; his restoration that accounts for the western facade, the (now-destroyed) spire, as well as modifications to the choir and the additions of gothic stained glass-windows.

Viollet-le-Duc’s restoration of the church was highly controversial, and to an extent still is today. “His approach to restoration was not, ‘Let’s fix the building as it is and put it in decent structural condition,’” says Cesare Birignani, an assistant professor of architecture at City College New York’s Bernard and Anne Spitzer School of Architecture. “In fact, he acted in a much more inventive and problematic way, because he claimed to reestablish or re-restore the church to an image that it may never have had. [It was] his own reinvention, or his own idea of how the church may have existed at the beginning of the 13th century” — an idealized version of French history that arguably never existed in the first place. The restoration also led to the reappraisal of the Gothic style as “a kind of the ultimate symbol of French architecture,” says Birignani. Unlike Renaissance-style architecture, the Gothic style was something the French people could claim as their own, which led to it becoming “a kind of collective symbol…[or] a collective creation of the French people,” he says. 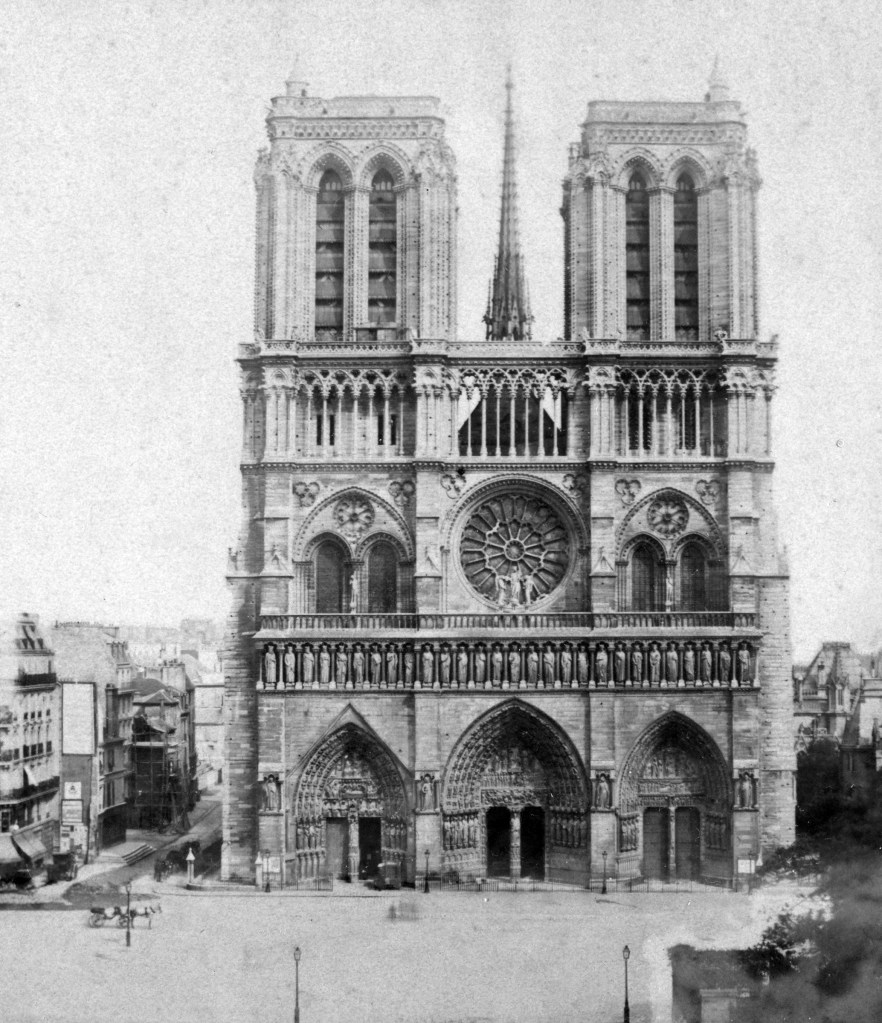 What it means to be “French,” however, has obviously changed a great deal over the past few centuries. While France is still predominantly Christian, the number of practicing Catholics has fallen year after year, from 64% in 2010 to 56% in 2012, according to one census figure. The number of Muslims in France is also growing, comprising more than 5% of the population (up from 3% in 2006) giving rise to rampant Islamophobia and the birth of far-right extremist parties like the National Front, headed by extremist Marine Le Pen. A profound income gap has also led to the explosion of protests from so-called “yellow vests,” a movement primarily made up of lower-middle-class and middle-class youth on the left who have vandalized many similarly historically significant French monuments (and whose latest actions Macron was expected to comment on in a scheduled press conference, which was postponed when Notre Dame started burning). In fact, in the hours following the fire, many started blaming the accident on the yellow vests; there was also a flurry of Islamophobic posts on social media attributing the fire to Muslim extremist terrorists, despite the fact that all evidence currently indicates that the blaze was accidental.

Despite the lip service many French people and politicians have given to the symbolic significance of Notre Dame in the hours following the fire, Birignani says that as France has changed, so too has Notre Dame lost the weighty significance it once had as a totem of national identity, and is skeptical of much of the effusive rhetoric that has been borne from the flames. Prior to the destruction of the cathedral, “I doubt Macron would have ever imagine[d] making a speech outside of Notre Dame…he probably would’ve stayed away from the cathedral for its association with religion, for its association with the monarchy,” he says.

Now that the world has rallied in support of the rebuilding of the cathedral, however, and donations have started pouring in from all over the world, there’s likely to be renewed interest around the cathedral as an emblem of French history and culture, which is deeply concerning to some. “One of the things that worries me about this event is that in a country that is deeply divided right now like France is and having this assumption of [Notre Dame] serving as a bedrock institution, it creates a hole and you have to imagine what it has to become again and who does the imagining, and that is a really loaded question,” says Harwood. 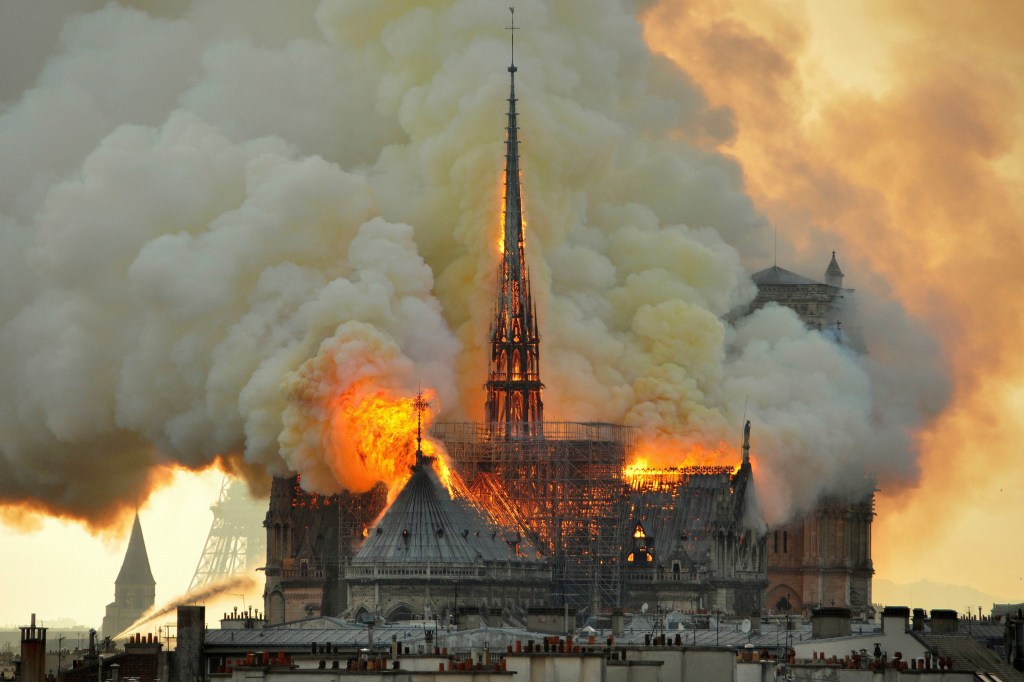 Although Macron and donors like Pinault have emphasized that the cathedral should be rebuilt as close to the original as possible, some architectural historians like Brigniani believe that would be complicated, given the many stages of the cathedral’s evolution. “The question becomes, which Notre Dame are you actually rebuilding?,” he says. Harwood, too, believes that it would be a mistake to try to recreate the edifice as it once stood, as LeDuc did more than 150 years ago. Any rebuilding should be a reflection not of an old France, or the France that never was — a non-secular, white European France — but a reflection of the France of today, a France that is currently in the making. “The idea that you can recreate the building is naive. It is to repeat past errors, category errors of thought, and one has to imagine that if anything is done to the building it has to be an expression of what we want — the Catholics of France, the French people — want. What is an expression of who we are now? What does it represent, who is it for?,” he says.

Hamburger, however, dismisses this idea as “preposterous.” Now that the full extent of the damage is being reckoned with — and is less than many initially feared — he sees no reason to not try to rebuild and preserve one of the few remaining wonders of medieval architecture. “It’s not as if in rebuilding the church one is necessarily building a monument to the glorification of medieval catholicism and aristocracy. It’s simply the case that the building has witnessed the entire history of France as a modern nation,” he says. “[You] can’t just erase history. It’s there, and it has to be dealt with critically.”