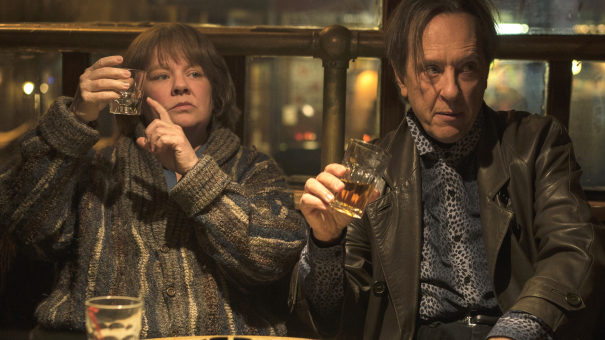 In Fox Searchlight’s dramedy Can You Ever Forgive Me?, comedy star Melissa McCarthy turns another corner raising her drama game as late curmudgeon and celebrity biographer Lee Israel who when her career went south, she went criminal selling off forged author letters.

Today at Deadline’s Contenders in New York, director Marielle Heller described the challenges of recreating 1991 in the Big Apple, and how such artsy neighborhoods were becoming rare.

“I was trying to capture a New York that is lost, a time when artists lived in New York and bookstores were a really exciting prospect. We were trying to capture lightning in a bottle before it disappeared.” And disappear it did. There were literally bookstores that the production wanted to use as locations that went out of business.

In the movie, Melissa McCarthy’s Israel and Richard E. Grant’s Jack Hock are misfits in the city not unlike Dustin Hoffman’s Ratso and Jon Voight’s Joe Buck in Midnight Cowboy. Jack is is Israel’s partner in crime when it comes to her forgery scheme.

“It’s a movie about loneliness and the type of people who get us through loneliness in life,” says producer Amy Nauiokas. While Grant and McCarthy had just met first the Friday before shooting, “their chemistry was fairly immediate.”

“On paper, the movie might sound like a downer,” said Heller, but Grant and McCarthy’s performances made the characters, who find joy and pain, relateable as they “got inside their skin.”

Editor Anne McCabe said that typically when she’s working on a female-driven movie, she’s often given the note to make the protagonist “look pretty”, but on Can You Ever Forgive Me?, the filmmakers always asked for a more somber tone. Producer Anne Carey related a story about how McCarthy asked one of Israel’s friends whether the late author would have enjoyed the movie.” Said Carey quoting the person, “‘Happiness really wasn’t her thing; she’d be happy with the attention to her work.”

Grant has gained tremendous traction in the supporting actor category for his turn in Forgive Me as a gay man living in the height of the AIDs crisis. “All my friends are dead,” is one line he fearfully utters in the film. with wins at the New York Film Critics Circle and nominations at the Gotham Awards and Film Independent Spirit Awards. Can You Ever Forgive Me? is also nominated at the Spirits in the Best Screenplay category.