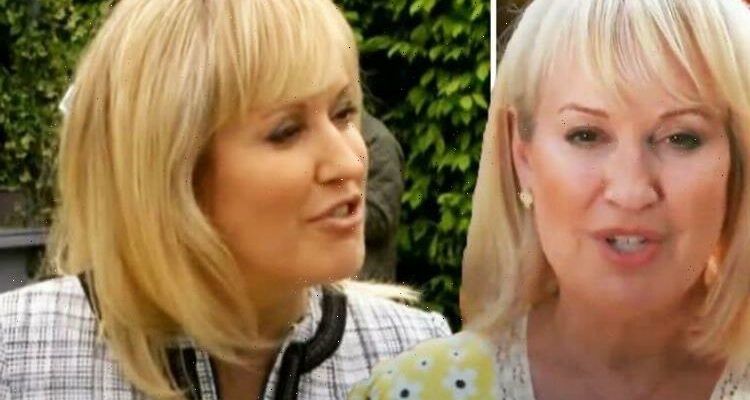 Escape to the Country presenter Nicki Chapman has told of her shock when she learnt that her brain tumour had mysteriously disappeared. Speaking on Kate Thornton’s White Wine Question Time podcast, the BBC host, 55, recalled that she broke down in tears after being told that her brain tumour had vanished while she was filming the hit property programme last year. The star underwent surgery to remove the tumour in 2019, but only part of it could be removed safely.

So Bert for the moment has gone and in the nicest of ways I hope the b*****d never comes back!

The TV personality revealed that she was filming the popular BBC property show when she received a call from her consultant.

Nicki told Kate: “Back in October I was having my yearly scan with my fantastic consultant, who knows that I adore him.

“I tell him regularly in front of my husband how much I adore him and the NHS that looked after me and continue to look after me so well.

“And he rang me, and I was standing in a field, because now we do phone appointments, we don’t do it face to face,” she explained.

Nicki went on: “So he rang me with my latest scans, and I was standing in a field and the Escape to the Country crew were moved away.

“I knew I was getting the call, so they moved away, and they gave me some privacy and I’m looking at all these pigs.”

The star continued to share that she broke down following the news, and still gets emotional now when talking about the moment.

She said: “The amazing consultant rang me and said, ‘The tumour, Nicki, has gone, for the moment it’s disappeared’.

She added that the medical professional was unable to explain why the brain tumour had disappeared.

“I get a bit teary just thinking about it,” she told podcast host Kate.

“And they don’t know why,” she continued.

“And obviously I’ve still got to be monitored because these things have habits of changing.

“So we take the good when we can, always look for the win in every situation.

“So Bert for the moment has gone and in the nicest of ways I hope the b****”d never comes back!” Nicki added.

Nicki underwent surgery to remove a “golf ball-sized tumour” in May 2019 and told Express.co.uk what she went through, insisting she “wouldn’t wish it upon anyone”.

The star had six weeks off her presenting duties in 2019, including missing the Chelsea Flower Show, which she has hosted every year since 2006.

Nicki said she first noticed the symptoms of the tumour early in 2019 when she began to struggle with her vision.

After undergoing many tests, she was informed by a neurosurgeon that she had a brain tumour and had it for “years” without knowing.