Like a good chunk of us in early 2021, Hong Chau didn’t feel like going back to work. It was still a strange, scary time: Coronavirus vaccines weren’t yet readily available, the film industry was just emerging from lockdown, and she’d just had her first child at age 41. “I really wanted to stay at home and be a parent,” she said recently on a call with Cosmopolitan. “I was just so happy to snuggle this little nugget. I wasn’t looking for anything.” Into this cozy refuge arrived a script for a Darren Aronofsky film. She was sorry to turn it down: “It wasn’t the right time for me. I had other things going on in my life.”

She eventually changed her mind (more on that later), and what followed, improbably, was a remarkably busy year of work, with significant roles in three high-profile projects all arriving in theaters within months: The Whale—Darren Aronofsky’s adaption of a play about a reclusive obese gay man attempting to reconnect with his teenage daughter—opens Friday and comes on the heels of The Menu, a dark satire on the fine-dining world from Succession director Mark Mylod. And January will bring Showing Up, indie director Kelly Reichardt’s first comedy, a portrait of an artist’s often-stalled day-to-day creative life.

All these movies, which are hugely different from one another, show Chau’s exceptional versatility and uncanny ability to grab your attention every time she graces your screen. Known best for her role as a political activist in Alexander Payne’s 2017 film Downsizing (for which she received awards recognition from the Screen Actors Guild, Golden Globes, and Indie Spirit Awards, no big deal) as well as for Lady Trieu, the enigmatic trillionaire in the 2019 miniseries Watchmen, Chau was born in a Thailand refugee camp to Vietnamese parents and emigrated to New Orleans with her family as a baby. She got her start in late-2000s TV, like on HBO’s Treme, before her first film role in Paul Thomas Anderson’s Inherent Vice in 2014. In the past five years, she’s delved into prestige series—appearing in Big Little Lies, BoJack Horseman, and Homecoming—and she shows no signs of slowing down on screens both large and small, with highly anticipated projects on the horizon from Wes Anderson (also shot in 2021), Rian Johnson, and Yorgos Lanthimos as well as Netflix’s adaptation of the bestselling 2019 political thriller The Night Agent. Basically, she’s very booked and very, very busy.

Like many others, Aronofsky was impressed by Chau’s work in Downsizing and Watchmen. “The variation between those two roles gave me the sense that she can do anything,” the director said via email. “The thing about Hong that’s amazing is every time you roll the camera, she gives a performance that is completely truthful and completely unique. Every take was different and exciting and educational.” He added that in her audition tape she even blocked the scene between herself and the camera in the way he was also imagining it: “It was obvious to me that not only was she a great actress, but she also, if she ever wanted to be, would be a very good director.”

Chau hopped on Zoom from New Orleans (where she’s filming with Lanthimos) to chat about making up for lost time, receiving a surprising offer from chef Dominique Crenn, the role race plays in her characters, and why content is a dirty word to her. 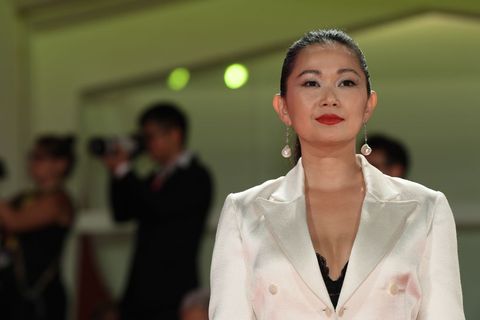 In The Whale, you play a loving if long-suffering caregiver and best friend to Brendan Fraser’s character. But you initially declined to audition for the role—how did you change your mind?

I just wanted to focus on my life. And I felt like there was no way it could be me. The role wasn’t written to be specifically Asian, so I felt like, Gosh, there’s so many people they could cast for this part who are a lot more famous than me. And I had also been really fortunate after Downsizing that I didn’t have to audition for the jobs that I got. So I just didn’t wanna invest any energy into it. Of course it’s Darren Aronofsky and it’s a great role, but I don’t think it’s for me. So I told my agent, I’m just gonna let this one go.

A week later my agent said that Darren really wanted to see me read. I’m always wary of situations where you’ve got no shot at it but they’re just seeing everybody so that they could say that they saw everybody. But this felt different. So I sent in my audition tape that I somehow managed to do with this crying baby in the background. [Laughs.]

I’m so glad I took that leap of faith and went to New York to work on this little film with such an intimate cast and a big story. It just felt truly miraculous that we got to work on something that beautiful with all of the craziness going on in the world at the time.

Darren Aronofsky has a bit of a reputation for being uncompromising when it comes to actors.

What do you mean by uncompromising?

I don’t think Darren is demanding in a negative way. All the roles in The Whale demand a lot of the actor. He cares a lot about everyone he works with, and when I see somebody who respects people in that way, it makes me want to work even harder for him. I think the stories [about his process] maybe give a different sense of who Darren is. But as a person, he’s incredibly lovely.

The Whale has been heralded as a major comeback for Brendan Fraser. Did you have a sense that would be the narrative with this project?

I had not seen a Brendan Fraser movie before, so I didn’t have this buildup in my head about who he was. I just met a man in a T-shirt and jeans, and we sat at a table together and read a script. He was so open and gentle and kind. We talked about our families for a bit, and I got to know him as a person. I didn’t have this idealized image of him as a heartthrob or anything like that. I see now, having gone to Venice with him, the outpouring of affection for him—it’s really very touching. I’m so happy for him, it really couldn’t happen to a better guy.

In The Menu, you play a severe-looking maître d’ who takes her job perhaps too seriously at a very exclusive foodie restaurant. Have you had any similar fine-dining experiences?

I don’t do a lot of fine dining. I didn’t grow up going to restaurants—we were poor, and so my mom cooked all my meals at home. If we ever did go to a restaurant, it was the little Vietnamese restaurant down the street, which felt like an extension of my mom’s kitchen, not a restaurant per se. It wasn’t until I went to college that I started going to restaurants, and it was something I had to learn how to do. I’m still not very comfortable at restaurants.

But I had a cool experience when we were filming The Menu. Chef Dominique Crenn came on as a consultant to make sure the set was running accurately. And she sidled up next to me during one of our breaks and said, I love what you’re doing. She’s just so spot on. I love all of your mannerisms, and I want you to come work for me. And she meant it! So if this acting thing doesn’t work out, I have a job at her restaurant.

You have a great fight scene in The Menu, but there’s also a lot of physicality in Showing Up, in which you play Jo Tran, a free-spirit sculptor and unintended frenemy to Michelle Williams’s grumpy artist.

It’s one thing to read a script and another thing entirely to actually do it. I wasn’t imagining that the art would be physical when I read it. Kelly had told me that she wanted Jo’s artwork to contrast with Michelle’s artwork, which was very small and intimate, and she wanted something that felt bigger. What was interesting was the pipe bending—

The scene where you’re wrestling a piece of padding?

Yeah, she’s making this carrot, but there’s all this wire that she has to wrap around this foam to create the shell. And I was sweating so hard and straddling this carrot. After we were done, Kelly was like, “Well, I just shot my first sex scene.” 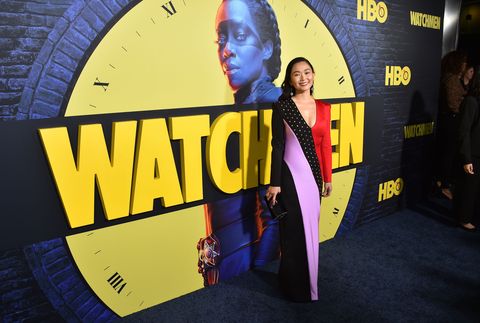 Is there a through line for you between these very different projects?

I could not have dreamed up the lineup I had in 2021, when I did four movies with four amazing directors on four incredible scripts. It definitely wasn’t by design. I was dumbfounded with each project that came up. It all feels like it’s happening organically, not because I have, like, millions of followers on social media. It’s very affirming for me that it’s just the work I’m doing that’s attracting these amazing filmmakers.

Race is not at the forefront of your characters in these films, and in fact, it’s almost not addressed. What are your thoughts on that?

The characters are always going to be Asian because I’m playing them, so in some way race is always going to be there. It just depends on how much it needs to be there for the story. I don’t have an agenda in terms of representation when I’m taking on a role. I never want to be encumbered by it. I don’t go into a role thinking I want to turn a stereotype on its head. I’m never thinking that because it’s like you’re being manipulated by something outside of the movie. I understand the general cultural dialogue that’s happening, but when you’re doing a movie, you’re there for the story and you’re there for that specific character. If films touch you, it’s because they also touch upon something universal. What I’m always trying to do with characters is represent their entire humanity. I’m there to dig into their darkness and lightness.

In 2017 you said you wanted to continue doing “really odd films, with interesting filmmakers.” These three certainly fit that description.

I love these types of films and the experience of working on them because they feel very personal to the filmmakers. It doesn’t feel like I’m just punching in and punching out at work. The filmmakers and the other actors are invested. That’s so special and rare because there’s so much demand for quote-unquote content. I feel like you would not describe these projects as content. That’s kind of a dirty word to me.

What was unusual was to have so many back-to-back. It took a really long time to get my career going. It took 10 years [of acting professionally] before Downsizing happened. I’m making up for lost time. The challenge is figuring out how to pace myself and give all of myself to each role as it comes along. It’s such an embarrassment of riches for me right now that I can’t complain. I just want to keep doing as much as I can for as long as I can—I’ll sleep later.