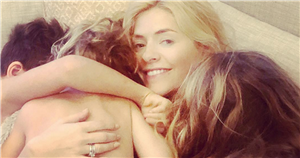 Holly Willoughby encouraged her children to write letters to the late Queen Elizabeth II to "process their grief".

The presenter, 41, who shared a rare snap of her kids as they laid tributes to the Queen over the weekend, spoke about how her children were coping with her death.

Speaking on Monday 12 September's edition of This Morning, Holly shared with co-presenters Philip Schofield, Alison Hammond and Dermot O'Leary how she had helped her children to understand what had happened and process the news.

"She was just consistently here for so many of us. So many of us never knew any different so suddenly for her not to be there…" Holly said.

"I think that is why on Saturday I wanted to take the children down because I think you are trying to explain it to young people. You are almost trying to understand it yourself. I found it quite helpful as, as I was talking to them, it was helping it sink in for myself."

Holly also explained how she encouraged her children, Harry, Belle and Chester, to write the late monarch letters to help them process their feelings over the news.

Harry, aged 13, is Holly's eldest child and he wrote: "Dear the queen, what a journey is has been from a regular young queen who only met 1 prime minister, to a national treasure who has met 15 prime ministers and is the greatest queen England has ever seen."

He ended his emotional message with: "Britain is so amazingly proud of your service for this country. And finally I want to say thank you for football, without you I wouldn't be playing for the team I am today. Long live the king."

Belle, 11, wrote: "I hope you're having an outstanding time in heaven with Phillip."

And Chester, 7, wrote: "To your majesty, thank you for being our queen."

Holly also opened up on how she had taught her youngest son Chester the idea of royal duty and service, and what that would mean for someone like the Queen or King Charles.

For all of the latest updates, sign up for OK!'s Royal newsletter .

"All of her own passions had to be put on the backburner for her country. Chester, he loves football but that would not be something he would get to do and it was giving him that level of understanding."

Holly was emotional as she spoke of accompanying her children to Buckingham Palace to pay their respects over the weekend.

"It was extraordinary to be there," she said.

"The last time I was there was for the Jubilee. To be there three months later laying flowers in her memory, it just felt very very emotional."

This week, OK! celebrates the life of Her Majesty the Queen with a commemorative special in honour of Britain’s longest reigning monarch. Be sure to pick up your copy.