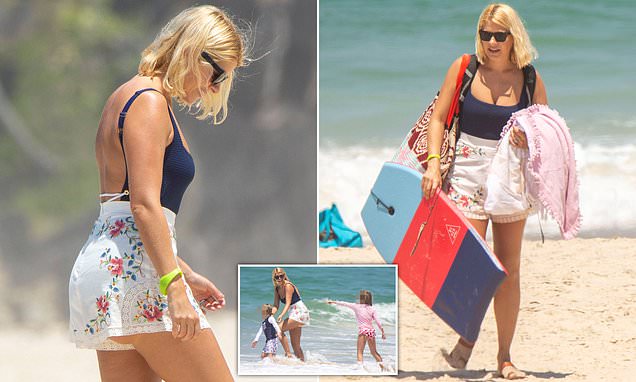 Holly Willoughby PICTURE EXCLUSIVE: I’m A Celebrity host puts on a leggy display in TINY white floral shorts as she enjoys a day at the beach with husband Dan Baldwin and their children

Holly Willoughby was showing off her incredible beach style in tiny white floral shorts on Saturday as she enjoyed a day at the beach in Australia and husband Dan Baldwin and their children.

The stunning I’m A Celebrity host took a break from hosting the ITV show to soak up some sun with son Chester, four and Belle, seven, wading into the sea as she gave them both a surfing lesson.

It comes have viewers have been calling for Holly to return to Australia to host I’m A Celebrity with Dec AND his presenting partner Ant McPartlin next year, after she won over viewers with her warm demeanour and hilarious reactions to the gruesome trials.