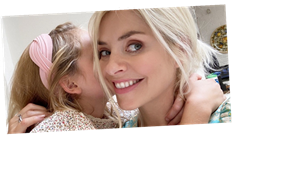 Holly Willoughby has shared an audio recording of her daughter Belle telling a joke live on Radio 1.

The 40 year old mum-of-three, who recently wowed viewers in a £42 floral dress on This Morning, took to her Instagram feed to post a short clip of from her brief time on the 24-Hour Lol-a-thon with Scott Mills, 46, and Chris Stark, 34, when she was joined by her nine year old daughter.

After being asked whether one of her kids had a joke to share with them, Holly replied: "Well it's funny you should say that, yes.

"Now I'm hoping I can believe her on this one because it's pretty good. She's here now," she said, before asking her daughter: "Belle do you want to tell your joke?"

Presenter Scott then said: "Wouldn't this be amazing if it was the rudest thing you'd ever heard?" to which Holly, who also shares sons Harry, 11, and Chester, six, with 46 year old husband Daniel Baldwin, responded: "No, it's definitely not. It's Radio 1 safe."

The trio praised the youngster for her clever joke as Holly gushed with pride by asking: "How good is that?"

Fans immediately took to the comment section as one person wrote: "Belle you were brilliant and the joke was spot on – very funny. Lots of love and laughs to you and Mummy ( who is also brilliant)," [sic] followed by three clapping hands emojis and three red heart emojis.

Another wrote: "This is the sweetest thing! Well done Belle, so good x," alongside a red heart emoji. While a third added: "Amazing and such a grown up voice," with a black heart emoji.

From Holly Willoughby to Meghan Markle, these are some of the women we’re honouring for International Women’s Day

It comes as Holly recently explained why she doesn't show photos of her children's faces. She discussed privacy rights on Wednesday's episode of the hit ITV daytime show as she and co-host Phillip Schofield aired an unseen clip of Meghan's interview with Oprah Winfrey.

Meghan said in the clip: "If you're at work and you have a photograph of your child on your desk and your co-worker says, 'Oh my gosh, your kid's so cute, that's fantastic, can I see your phone so I can see all the pictures of your child?,' you go, 'No, this is the picture I'm comfortable sharing with you'.

"And then if they double down and say, 'No, but you've already shared that one, so you have to show me everything. You know what, I'm just going to hire someone to sit in front of your house or hide in the bushes and take pictures into your backyard, because you've lost your right to privacy because you've shared one image with me'."

Whilst royal expert Camilla Tominey hit back at Meghan's comments, claiming the Royal family have had more privacy in recent years than ever before, Holly empathised with the Duchess of Sussex.

She said: "Camilla, what she's talking about is the children here, and that is the case. I know this even with my own children, I choose not to show my children's faces because I know that that's the deal.

"If you show one photograph then they are, they're out there, they're there for consumption for everybody, which is why I choose not to do it. So in that example, she's right there, isn't she?"