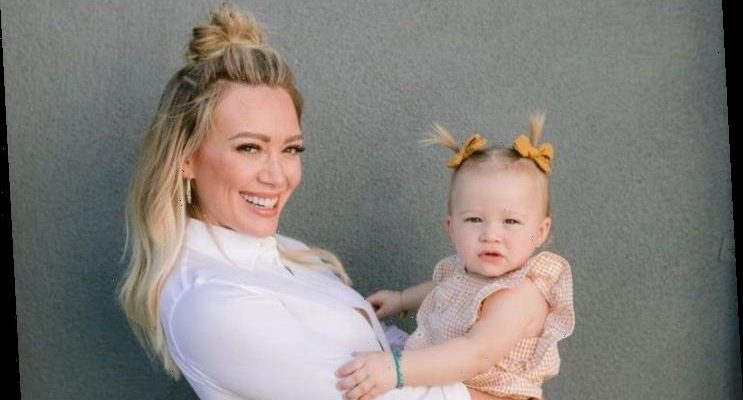 The ‘Lizzie McGuire’ actress reveals she accidentally made her one-year-old daughter Banks puke after tossing, dragging, and hanging the toddler upside down on bed.

AceShowbiz –Hilary Duff “felt so bad” after accidentally making her one-year-old daughter vomit when she played with her after returning home from a long day at work.

The 32-year-old actress has been kept busy in recent weeks shooting the Disney+ reboot of “Lizzie McGuire” and her hit U.S. TV show “Younger“, so has been making the most of her time in between with her seven-year-old son Luca and daughter Banks.

But the excitement of seeing her mum at home was too much for Banks, who the screen star shares with fiance Matthew Koma, recently, as Hilary recounted her “complete mum fail” during an interview with Entertainment Tonight.

“I felt so bad about it… I made my daughter throw up the other day,” she grimaced. “I think she got so excited because she hadn’t seen me all day, and we play really rough on the bed, I’ll toss her into a pile of pillows, and I’ll hang her upside down and drag her around the bed. And Matt was there, and we were just tickling her and tossing her all around.”

“I hadn’t realised that her nanny had just fed her dinner, and then I gave her a whole bottle on top of it. Just mom fail… she fully was like blech! Everywhere, on the bed. I felt so bad!”

When it comes to spending time with her children, Hilary knows it can be rare due to her busy schedule, so does her best to be “really present” whenever she’s with Banks and Luca, who she shares with ex Mike Comrie.

“I think I’m really good at the juggling act of being really present with my kids when I have the time with them. I try to put my phone down, I try to take a break from all of that and turn myself off,” she smiled.

“There’s times when there’s a deal on the table, and I’m like, ‘I just got off work, I’m walking in the door, I haven’t seen my kids. If it goes away, it goes away. Like, I don’t care. They are No. 1 for me. And I think I make things fun… I think I get that from my mum.”