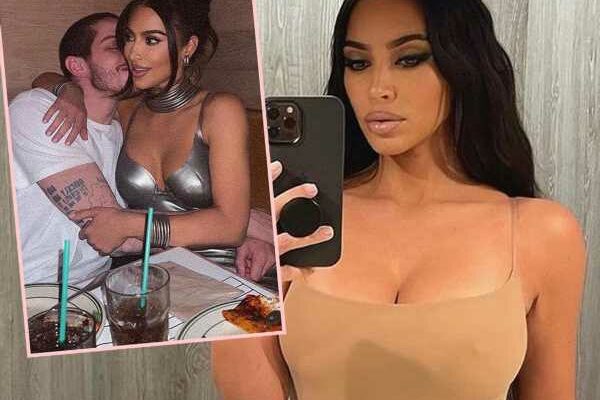 Was the 13-year age gap between Kim Kardashian and Pete Davidson the real reason for their split? It sounds like it…

In case you somehow missed it, news dropped on Friday that the pair decided to go their separate ways sometime this week. Sources told E! News that Kim and Pete have a lot of “love and respect for each other” and want to remain friends – but the long distance and their busy schedules ultimately made it really difficult to maintain a relationship.

The news seemingly came out of nowhere for many people, especially since multiple reports expressed how in love Kim and Pete were despite being far apart from each other as the comedian is filming in Australia for Wizards! And even though Us Weekly reported just a couple of days ago that “the distance has been hard,” they seemed to be making it work by being in “constant communication” with each other. So no wonder many Kete shippers are scratching their heads over what went wrong! Now, new details have come out to shed some more light as to why they really split!

According to Page Six, an insider claimed that Kim broke up with Pete due to their age difference and the fact that they are at different stages in their life, making it difficult for them to have a long-term relationship. They explained:

“Pete is 28 and Kim is 41 — they are just in very different places at the moment. Pete is totally spontaneous and impulsive and wants her to fly to New York, or wherever he is on a moment’s notice. But Kim has four kids and it isn’t that easy. She needs to focus on the kids.”

Understandable! And not to mention the fact that they were not on the same page when it comes to having children. While Pete said it was his “dream” to become a father during an appearance on Hart to Heart, The Sun shared that Kim “told friends she does not want another baby right now.” And that alone did not exactly make us hopeful about the future of the relationship…

While Pete is busy with his career as an actor and comedian, Kim has a ton of responsibilities in addition to being a momma, such as running multiple businesses and starring on Hulu‘s reality show The Kardashians. The source noted that she was “totally exhausted by this relationship and other things going on in her life” before the split. Adding on to the stress, we all know that their love story did not exactly run smoothly – mostly because her ex-husband Kanye West was less than thrilled seeing her with Pete. As the Page Six insider puts it:

“When Kim is with someone else, Kanye can cause problems with the kids. He tries to divide and conquer. He can’t help it. Kim is a really dedicated mother, and her kids will always come first. She wants and needs harmony at home and in her life.”

We cannot say we are surprised by this breakup, but it was certainly fun while it lasted…

Reactions, Perezcious readers? Do you think Kim and Pete split due to their age difference? Drop your thoughts on the breakup in the comments (below).