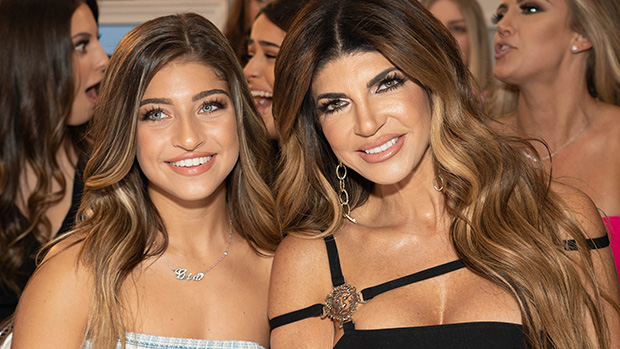 Happy 47th birthday, Teresa Giudice. We’re celebrating the doting mom on her big day by looking back at some of the cutest pics she’s ever taken with her daughters!

Teresa Giudice is a busy woman, but despite all of her work ventures, her top priority in life is being a mom. The 47-year-old, who celebrates her birthday May 18, and her husband, Joe Giudice, are proud parents to four gorgeous daughters: Gia, 18, Gabriella, 15, Milania, 14, and Audriana, 10. The girls have grown up their entire lives in the public eye because of Teresa starring on the hit Bravo show, The Real Housewives of New Jersey. The reality star isn’t shy about sharing pics of the kids on social media or bringing them to public events, so there’s been plenty of cute pics of the hot mom with her daughters over the years.

Back in December 2018, Teresa took Gia and Milania to Jingle Ball at Madison Square Garden, and they had the chance to pose for photos on the red carpet before checking out the concert. The girls looked just like their mom in the adorable photos, and it seemed like they had so much fun at the event! Now that she’s older, Gia gets the chance to attend a lot of fun events with her mom, and in May 2019, they sat front row at Melissa Gorga’s Envy Fashion Show in New Jersey, as well.

Teresa has also brought some of the girls to other fashion events at New York Fashion Week over the years. They’ve taken pics on the red carpet and gotten to enjoy child-friendly fashion shows, which seemed like the perfect bonding experience for the mom and her girls!

The Giudice family has obviously been through a lot — Teresa was kept away from her daughters for almost a full year while serving a prison sentence for committing fraud in 2015. Just months after she was released in December of that year, Joe began serving his sentence. He was released three years later in March 2019, but has since been held in ICE custody while facing deportation back to Italy. This has obviously put a strain on Teresa and the girls, but the reality star has remained strong for the girlsl

Click through the gallery above to check out the cutest photos of Teresa and her four daughters over the years!