A social media star! Gwyneth Paltrow has already established herself as an actress, a philanthropist and a wellness guru — but she’s now slowly becoming one of the most iconic participants on Instagram.

The former Glee actress often uses Instagram to give fans a behind-the-scenes look at her life, her career and more. In March 2019, Paltrow posted a selfie with her ex-husband, Chris Martin, in honor of his 42nd birthday. “Happy Birthday CAJM. This is a special one,” she captioned the sweet snapshot. “We love you so much. #42.”

One month prior, Paltrow celebrated pal Drew Barrymore’s 44th birthday alongside Nicole Richie and Cameron Diaz. The Goop founder shared a pic of the hangout and wrote, “The angel all in white… it’s her birthday!!!!!!! @drewbarrymore we love you dearly. Your immense brain, the way you so perfectly articulate your unique thoughts, your propensity for giant underpants and the deep love and loyalty you have for your friends and daughters fill us with joy and inspiration!!”

But loving messages to those in her inner circle aren’t the only things Paltrow writes on Instagram. The Clean Plate cookbook author has become known for her trolling comments on the photo-sharing platform, many of which are captured by amused fans.

From questions about Tristan Thompson and Jordyn Woods’ hookup to her opinion on Justin and Hailey Bieber’s relationship, scroll through the gallery to read some of Paltrow’s cheekiest Instagram comments! 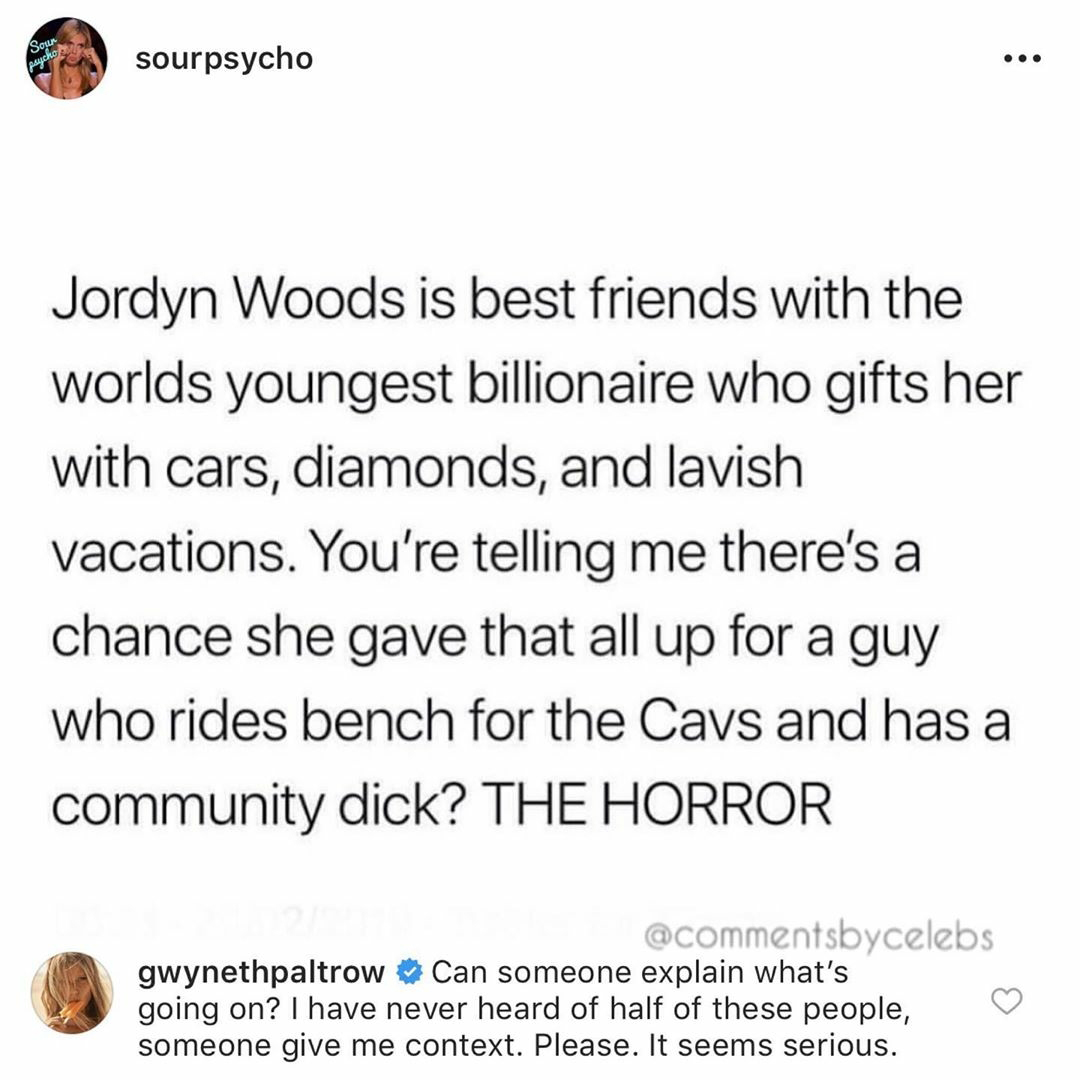 Out of the Loop

The Politician actress was confused when she saw an influx of people talking about Woods and Thompson’s cheating scandal. When Paltrow saw a meme on Instagram that read, “Jordyn Woods is best friends with the world’s youngest billionaire who gifts her with cars, diamonds, and lavish vacations. You’re telling me there’s a chance she gave all that up for for a guy who rides bench for the Cavs and has a community d—k? THE HORROR,” she had to get answers.

“Can someone explain what’s going on? I have never heard of half these people,” she commented in February 2019. “Someone give me context. Please. It seems serious.” 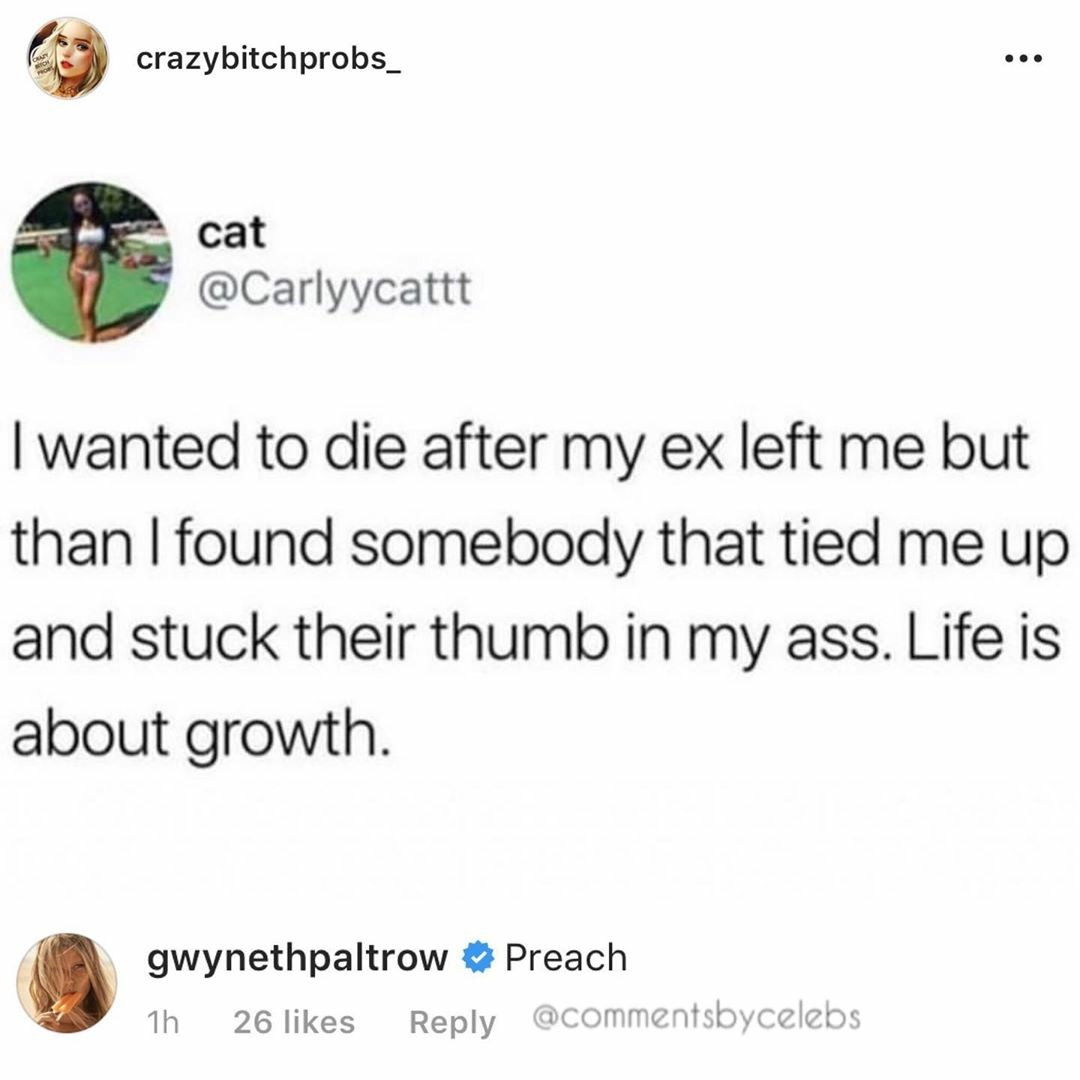 What happens on the internet doesn’t stay on the internet. Paltrow added her two cents to a sexual tweet in January 2019. “I wanted to die after my ex left me but than [sic] I found somebody that tied me up and stuck their thumb in my ass,” the Twitter note, which was screenshotted and posted to Instagram, read. “Life is about growth.” The Oscar winner noted simply: “Preach.” 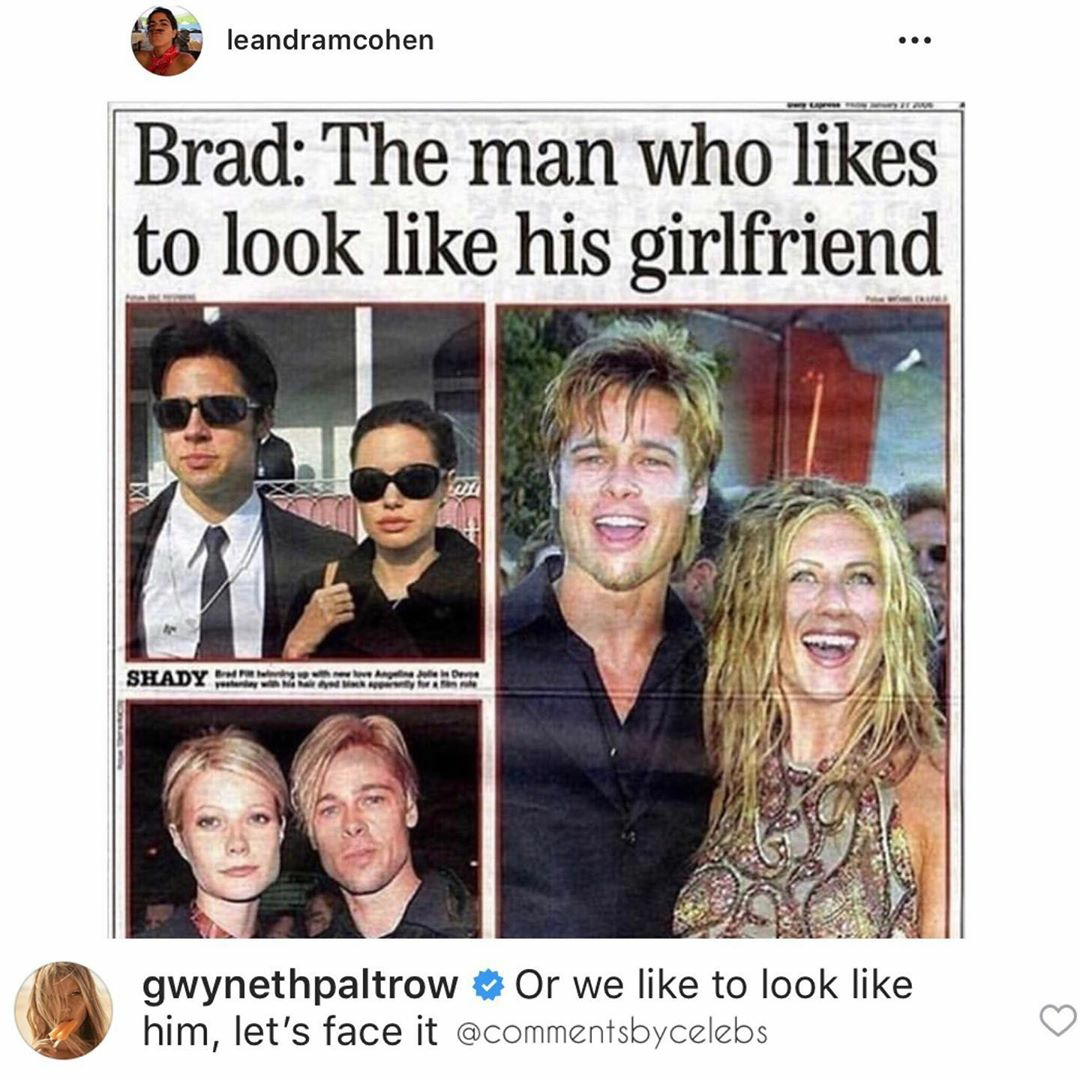 After a newspaper noted that Brad Pitt “likes to look like his girlfriend” of the moment, Paltrow, who was engaged to the Fury actor in the late ‘90s, came up with her own conclusion. She commented in January 2019: “Or we like to look like him, let’s face it.” 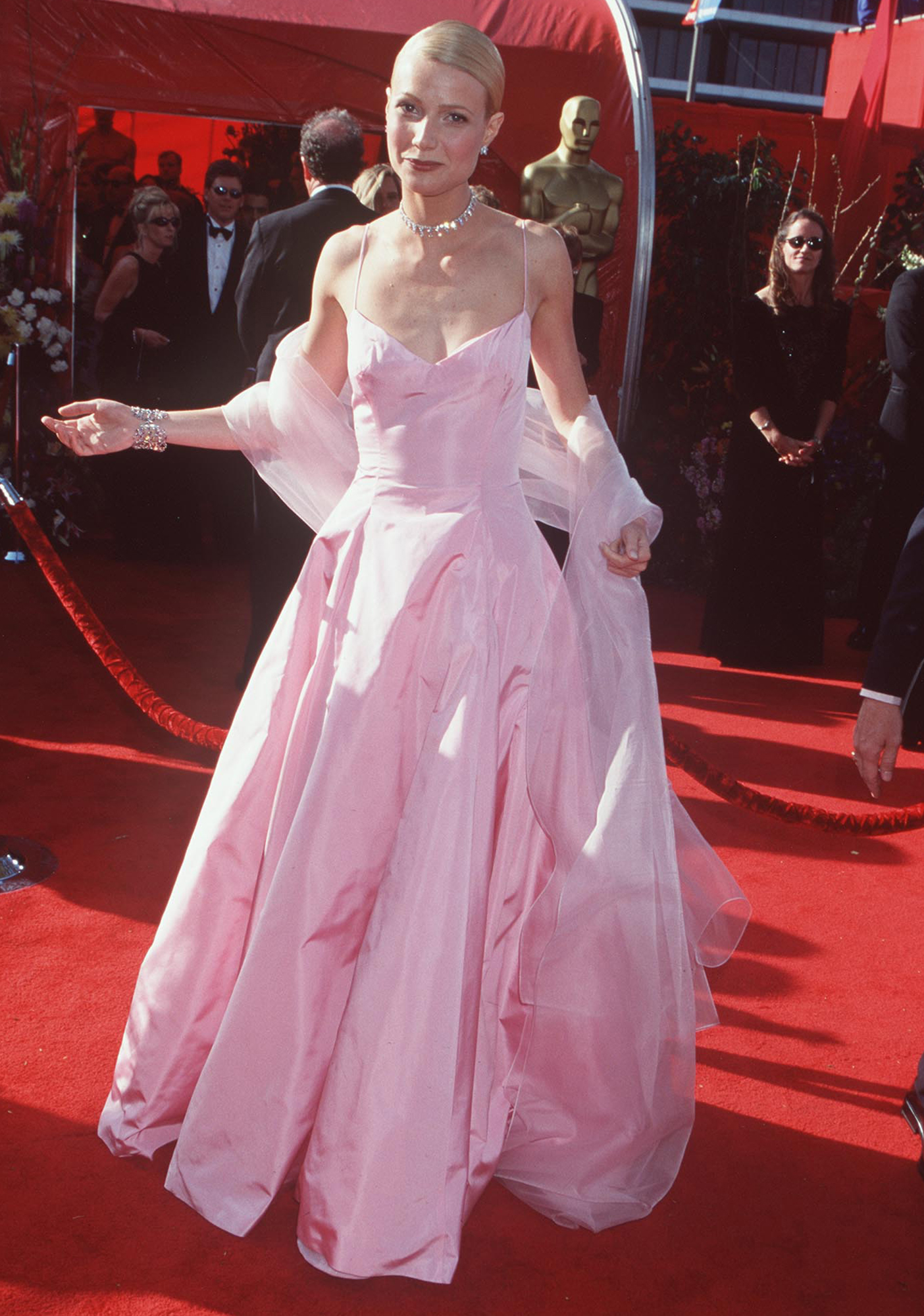 When Paltrow won the best actress Oscar in 1998 for her role in Shakespeare in Love, she wore a stunning light pink gown. A popular meme account shared a picture of an elderly woman wearing a similar garb in February 2019 and the Glee alum cheekily quipped, “I was wondering where my Oscar dress went.” 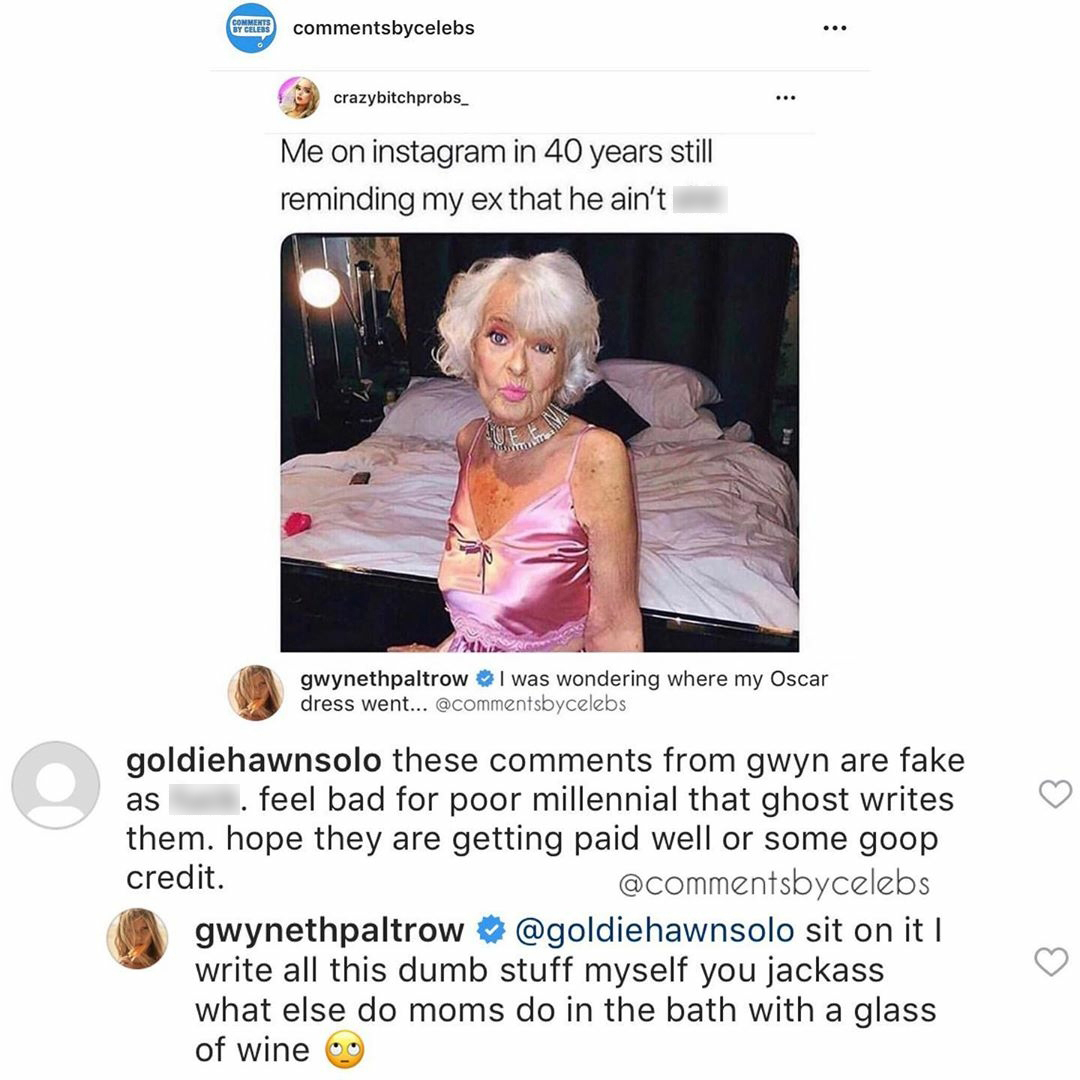 No Time for Haters

The mood changed when an Instagram user replied to Paltrow’s Oscar joke and wrote, “These comments from gwyn are fake as f—k.” The Spider-Man: Homecoming star hilariously fired back: “Sit on it I write all this dumb stuff myself you jackass what else do moms do in the bath with a glass of wine.”