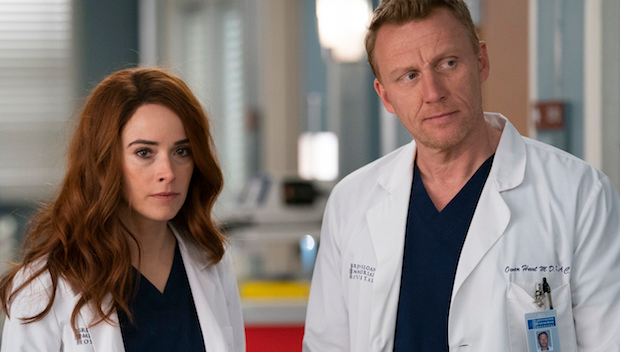 Owen and Teddy had to deal with the surprise arrival of Megan Hunt, who knew nothing about their situation, so things turned awkward pretty quickly during the April 4 episode of ‘Grey’s Anatomy’.

During this week’s Grey’s Anatomy, Owen’s sister Megan Hunt surprised him by showing up in Seattle, but she was also in store for some surprises of her own, as she had no idea about Owen and Teddy’s current situation. To be frank, Megan had no idea about a lot of things, including that Teddy was in town, pregnant with Owen’s baby, and currently doing his job at Grey Sloan. So to say that Megan was take aback by all of this information would be an understatement. Megan was also upset to find out that Teddy was hunting (no pun intended) for a house with her new boyfriend, Tom.

Anyway, after the two siblings butted heads over a patient who came to the hospital for a penis transplant, and Owen coerced the patient to do what he needed to do to recover after serving in the military, Megan begged him to do the same. Megan told Owen that he still hadn’t healed from the traumas he experienced overseas. Especially considering all the crazy things that he’s done over the past couple of years — going back and forth between Amelia and Teddy, and adopting a baby. “Owen, you’re not well,” she concluded. “Do the work to fix it.”

Meanwhile, Alex asked Link to go to his house and check on Jo since she hadn’t returned to work in nearly a week. She still hadn’t told Alex about her meeting with her biological mom and she was barely getting out of bed. And Link tried his best to help Jo, even going as far as offering to her laundry for her, but nothing seemed to work. In fact, Jo did get out of bed, but she only did so so that she could drink a ton of alcohol and laugh while watching cartoons. When Alex returned him, he thought Jo seemed better, but Link — who had spent the past few hours with her — looked scared for where Jo’s heading.

Finally, Meredith worried about DeLuca operating alone with Richard due to him catching them making out at Jackson’s place, but it wasn’t so bad. After some awkward exchanges over how DeLuca feels about Meredith, they got down to business and Richard realized that DeLuca’s a “good guy”. He even told Meredith that after their surgery, during which DeLuca took on a complicated part of the procedure by himself. And Richard urged him to think about the future of his career and what speciality he’d like to go into.