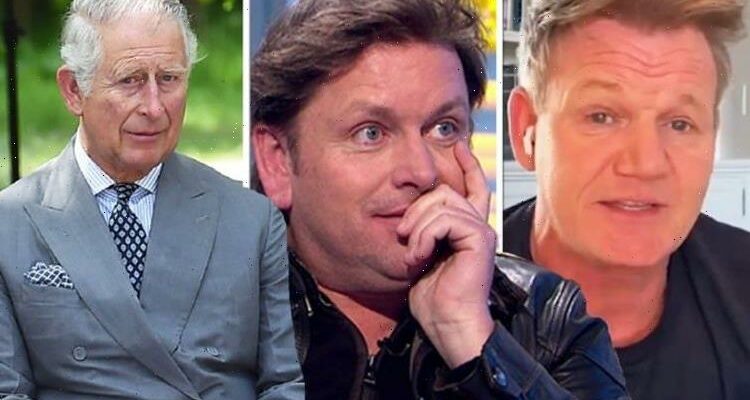 James Martin, who fronts his self-titled show on ITV, has addressed a royal encounter where he seemingly believed there had been a mix-up. The on-screen star opened up about cooking for Prince Charles, as he claimed Gordon Ramsay was not available.

The TV chef often shares his delectable recipes and homemade delights to viewers having had decades of cooking experience.

In a candid interview, the 49-year-old joked that there may have been a shortage of chefs available for the Prince of Wales event.

His cheeky admission comes after an appearance on Al Murray’s The Pub Landlord.

The TV star addressed the moment in the unearthed clip.

Al Murray quizzed: “You cooked for Prince Charles. That must have been tricky?”

“Yes, he invited me to cook for 50 of Europe’s greatest chefs. Most of them were French,” James replied.

A stunned Al commented: “Really? And you did that?”

James then joked that other popular chefs were not available at the time of the event so the Prince of Wales asked him to attend.

“Well nobody else was available,” he replied, “Gordon Ramsay was in America.”

The ITV favourite also revealed that he cooked the Beef Wellington – which Gordon has declared as his signature dish by how he prepares the classic meal.

In the 2005 clip, James added: “I did cook [Prince Charles] Beef Wellington but no one got the joke.”

James is not a stranger to royal encounters and has met Prince Charles on a few occasions over the years.

The TV chef previously opened up about an intimate lunch he shared with the Queen which admittedly left him taken aback, as the ITV favourite was left chatting alone to the royal.

The award-winning cook added it was a “real pinch yourself moment” following his encounter with the Queen and the late Prince Philip.

The small-screen star shared it was a “surreal” experience as the chef dished on the pair’s surprising common interest.

Speaking on ITV’s Lorraine with Christine Lampard, James explained: “It was an amazing experience.

“You get invited for lunch and you’re thinking there are going to be 300 people there for lunch and it was just eight of us. A bit surreal.”

Christine quizzed further: “Didn’t it narrow down to just you and her eventually?”

“Yes, we just sat there talking about corgi dogs,” James replied. “I love my dogs, you see.”

James Martin’s Saturday Morning airs today on ITV at 9.25am.