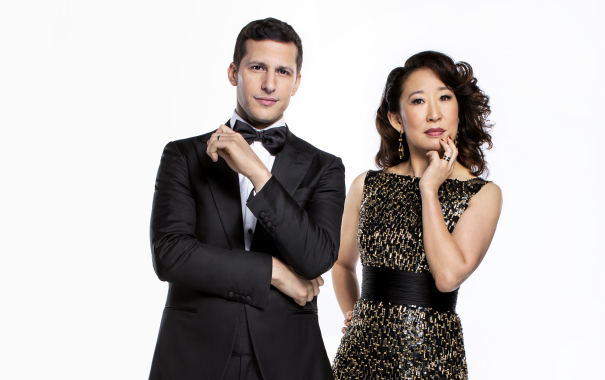 This is only the second time the Golden Globes has been hosted by a duo, following the three-year stint of Samberg’s former Saturday Night Live colleagues Tina Fey and Amy Poehler.

Samberg was the obvious choice to host the awards. He is a Golden Globe winner for Brooklyn Nine-Nine and the series, also a Golden Globe recipient for best comedy-musical, launches on NBC Jan. 10, four days after the Globes. Additionally, Samberg, who has plenty of live TV experience from his years on Saturday Night Live, has hosted major awards shows before — he emceed the 2015 Primetime Emmys for Fox, where Brooklyn Nine-Nine aired for five seasons., as well as the 2013 Independent Spirit Awards.

Samberg and Oh did a test run as co-presenters at the Primetime Emmy Awards in September, which aired on NBC. The two did a comedy bit that drew laughs, and the network bosses likely took notice.

Samberg and Oh have something in common — they both won Golden Globes in the first year their primetime series were eligible — Samberg in 2014 when then-freshmanBrooklyn Nine-Nine was named best comedy-musical series, and Oh in 2006 for ABC’s Grey’s Anatomy. Oh is now riding high on the critical and ratings success of her new series, BBC America’s Killing Eve.