Ginger Zee has never shied away from the dangers of meteorology, and she had fans wishing she’d stay safe on Wednesday as she reported from where Hurricane Ian was due to strike.

DISCOVER: Ginger Zee’s move regarding her sons and social media

The Good Morning America presenter took to her Instagram to share the update, where she made sure she was protected from the rain and high winds in a blue coat. Sharing an update on Ian with followers, she said she was in a “serious situation” as if the storm continued to be classed as a category 4 when it made landfall, it would be only the fifth time such a weather event has happened in the nation’s history.

WATCH: Ginger Zee has fans worrying for her safety

Ginger showed a map of the storm’s path from Fort Worth all the way up to Orlando, and also showed a red circle on the map around Fort Worth where it’s believed the most damage will occur.

She then issued a warning about the expected storm surge, which could reach between 12 to 16 feet and would be enough to “move cars, move houses”.

As she left her hotel to show the effect the winds were already having, her voice was mostly drowned out as she showed the water in the swimming pool and the palm trees swaying.

As her video ended, her producer was calling her back in, and Ginger urged her followers to “stay safe”.

The same sentiment was returned in the comments, as one friend said: “Stay safe my sweet friend!!!!!! Xoxo,” while another simply commented: “Stay safe.”

A third added: “Be careful! Prayers for all y’all and the people of Florida!” while a fourth penned: “Be safe you and the GMA team out there,” and a fifth had a sweet compliment as they wrote: “Best meteorologist in the world.“

Alongside being the chief meteorologist for ABC, Ginger also heads their climate unit as managing editor, and she hosted a special show on the issue last month alongside David Muir and Cecilia Vega. 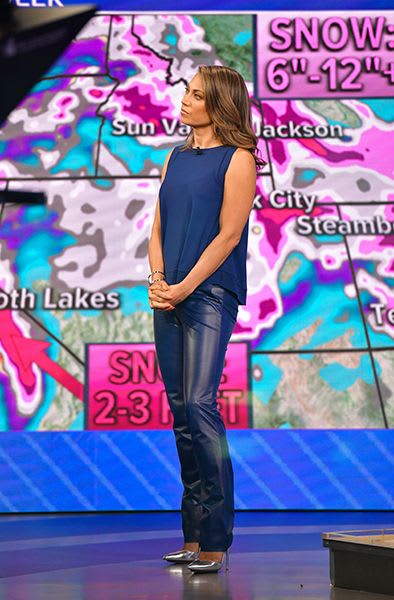 Ginger always has the best reports on the climate

During the show, Ginger came on to contribute to the discussion surrounding the new watershed climate bill introduced by Joe Biden.

She explained the implications of the bill, which aims to combat climate change through the introduction of more solar power and electric vehicles by way of rebates and credits for citizens.

“Bottom line, this will reduce emissions,” she stated to David, mentioning that it could help raise the GDP by 1% and help fight the “warming of our planet.”